2 dead after boat goes down in waters off Vancouver Island

TOFINO, B.C. -- Two people are dead and three others were treated and released from hospital Sunday after a fishing boat went down off the west coast of Vancouver Island near the remote tourist community of Tofino.

All five people on board the vessel were taken to shore Sunday afternoon, but health officials later confirmed that two of them had died, Coast Guard spokesman Dan Bate said in a statement.

The 8.5-metre-long catamaran was fishing for halibut near Bartlett Island, north of Tofino, B.C., on Sunday afternoon, he said.

Someone on the boat made a distress call around 1:20 p.m., said Sub-Lt. Melissa Kia with the Joint Rescue Co-ordination Centre in Victoria.

"We were able to talk with the vessel, live, to confirm that the five passengers were abandoning into the water. While the boat was attempting to get in a better position to speak with us via cellphone, it lost communications with the Joint Rescue Co-ordination Centre," she said.

Coast guard rescue boats, a Royal Canadian Air Forces helicopter and a plane from CFB Comox were all dispatched to look for the passengers, and a broadcast was put out asking marine vessels in the area to search the area.

Two commercial float planes also responded to the call for help, Kia said, and one of them spotted the people in the water and directed rescuers to the location. 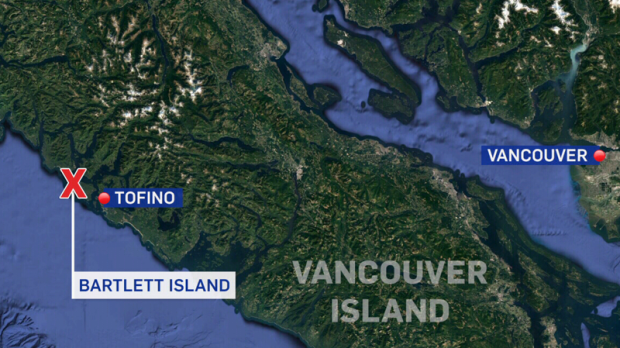 "All five people were recovered from the water by two vessels of opportunity (non-coast guard boats) that were very close to the position," Kia said.

Jason Bertin said a float plane from his Tofino company, Atleo River Air Service, spotted the vessel and was able to pinpoint its location for rescuers.

Bertin said he was in the helicopter but turned back after the vessel was spotted by the other aircraft.

Bate said the boats linked up with the coast guard, and an off-duty paramedic provided CPR to one passenger while a Coast Guard Rescue Specialist tried to resuscitate another.

All five people were taken to emergency health services in Tofino. A spokeswoman for Island Health said Sunday that the survivors were treated and released.

What caused the vessel to take on water remains unclear.

Kia said the sea was about two to three metres high Sunday afternoon and lighting conditions in the area were good. She said the water temperature off the west coast of Vancouver Island is between about eight and 10 degrees at this time of year.

Bertin said the vessel was located in waters "very close" to where the whale watching vessel Leviathan II capsized in October 2015 with 27 people on board. Six people died in that incident.

The Transportation Safety Board has yet to complete its investigation into the cause of the tragedy. In the days immediately following the sinking, investigators said Leviathan II passengers had been standing on one side of the top deck when a wave hit the opposite side of the vessel.