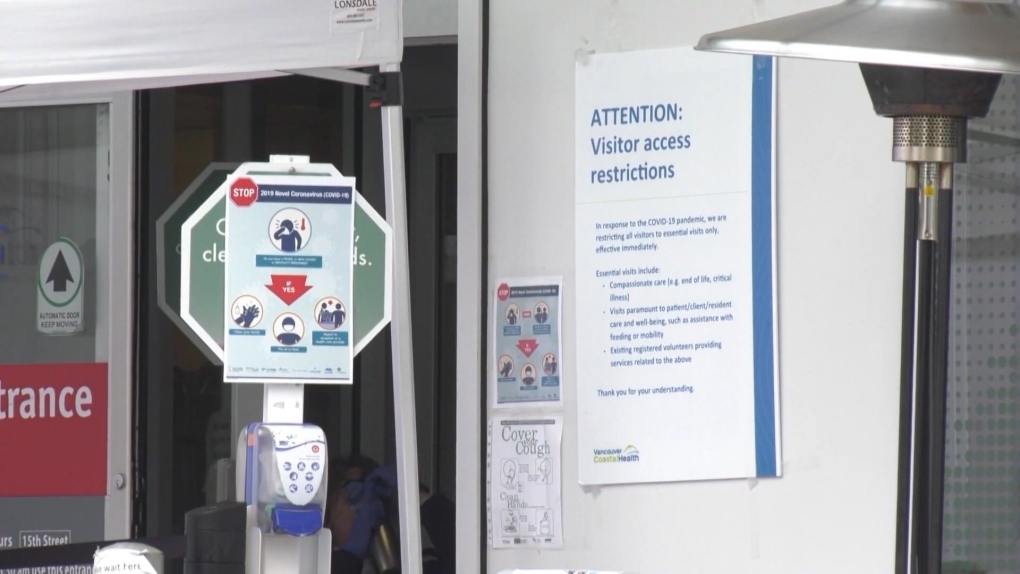 Signs warning of COVID-19 restrictions at a B.C hospital are seen in this undated image.
Vancouver -

In its final COVID-19 update of the week, the B.C. Ministry of Health announced 17 more deaths Friday, bringing the province's death toll for the pandemic to 2,747.

Hospitalizations continued to decline, however, with 846 COVID-19-positive patients admitted as of Friday.

That total includes both those whose coronavirus infection is serious enough to require hospitalization and those admitted to hospital for other reasons who tested positive incidentally.

There were 136 COVID-19-positive patients in B.C. intensive care units as of Friday.

More than half of the deaths attributed to COVID-19 on Friday were in the Fraser Health region, where nine new deaths were announced.

Many of those who have died in B.C. during the pandemic have been residents of long-term care and assisted-living facilities.

As of Thursday, BCCDC data showed that unvaccinated people are overrepresented among the deaths attributed to COVID-19 in B.C.

More than 90 per cent of B.C. residents ages five and older have received at least a first dose of a COVID-19 vaccine, and 85 per cent have received two shots.

Among those ages 12 and older, 51.5 per cent have received a booster dose.

The ministry also announced 1,245 new lab-confirmed cases of COVID-19 on Friday, though that number is not considered representative of the actual spread of the disease in the province because B.C. no longer recommends testing for most people.

Still, the numbers of newly confirmed cases - like hospitalizations and intensive care admissions - have been declining in recent weeks.

B.C. health officials have said they believe transmission of the Omicron variant peaked in the province in early January, with hospitalizations peaking a few weeks later.

Provincial health officer Dr. Bonnie Henry has promised an update on the province's COVID-19-related public health orders on Tuesday, hinting that some - but not all - will likely be lifted.