Will experience prevail for Wild vs. quick-strike Canucks? 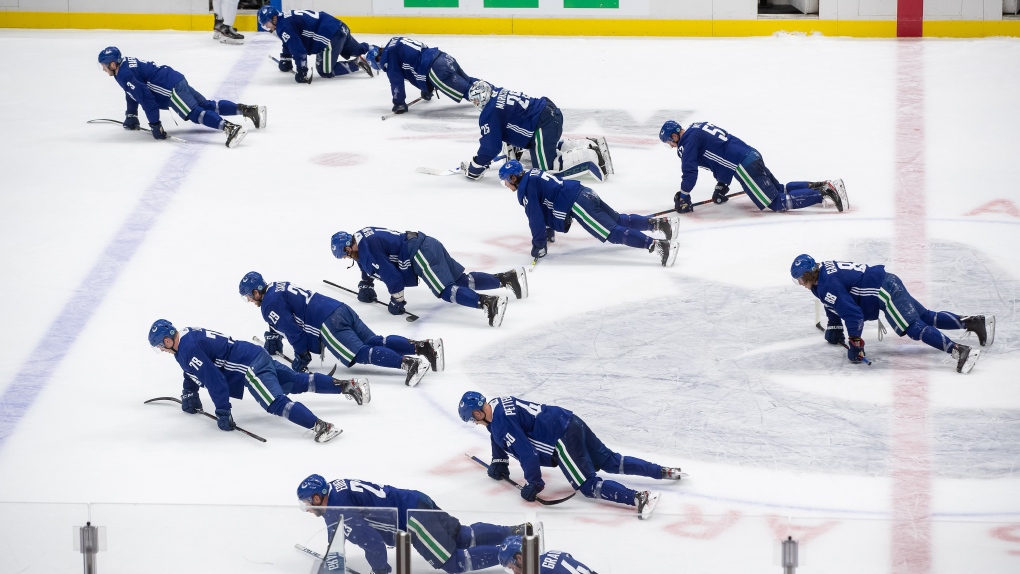 Vancouver Canucks crawl on the ice after losing a split-squad scrimmage during the NHL hockey team's training camp in Vancouver, on Wednesday, July 15, 2020. (Darryl Dyck / THE CANADIAN PRESS)

The virus pause has provided the Minnesota Wild as they are currently constructed with perhaps their best and last opportunity to make a long post-season run.

They caught a break when the NHL rolled out a 24-team format for the restart, since they were one point below what would have been the Western Conference cut line. The overall unpredictability of playoff hockey could be off the charts, after a nearly five-month break in the action.

The Wild, who have not won a post-season series in five years, are also the older and deeper team in this best-of-five qualifying round series against the Vancouver Canucks that starts on Sunday night in the Edmonton bubble.

"I think you look for every advantage you can get," left wing Zach Parise said. "They do have a young, really skilled, good team that's going to be good for a little while in the next few years. If we can use that experience that we talk about as an advantage, of course. Being thrown right into this thing, we've got a lot of guys who have played some pretty important games, some big games. If that can give us any type of edge, we'll take it."

"I don't think we're worried at all about them. They're going to jump into the games, make plays, be confident, and they're going to be our best players," defenceman Christopher Tanev said.

Nearly every player around the league will be healthy and rested, of course, and any newbie nerves for a Canucks team that has not qualified for the playoffs in five years ought to be sedated by the absence of spectators. The Wild, to be sure, will have their hands full with the up-front speed and power-play potency possessed by the Canucks, not to mention the scoring threat posed by Miller and Pettersson that's higher than anyone on the Wild.

"I think that experience is always going to be something that's beneficial when the time comes for playoffs and important games," Wild goalie Devan Dubnyk said. "Is it a game breaker, one way or another? I don't necessarily think that, especially in this strange situation that it's going to be."

Canucks goalie Jacob Markstrom, who was sidelined by a knee injury about two weeks before the shutdown, was at home in Sweden during the sequester but able to resume skating earlier than his North American peers.

"He's a leader on our team and a leader by nature," said coach Travis Green. "There are certain guys in every room who will say the hard things that need to be said some times, and I would count him as one of those guys. He's fiery and wants to win badly."

The Wild weren't ready yet to declare their primary goaltender for the series after Alex Stalock overtook Dubnyk on the depth chart this winter. Stalock started eight of Minnesota's last 10 games before the pause, winning six.

"I just wanted to come in and compete as much as I could and be ready to play if called upon, and I think that's the same for Al," said Dubnyk, whose goals against average (3.35) and save percentage (.890) were by far the worst of his six seasons in Minnesota.

The Canucks were eighth in the league with 228 goals, the first time they ranked in the top 10 in five years. Miller, who had a team-high-tying 27 goals, set a career best with 72 points in his first season with the Canucks.

Koivu has appeared in 55 playoff games with the Wild, the most in franchise history, and this could well be his final stretch in the NHL with a contract that's expiring.

"We all realize now that anything can happen, and so you just want to have fun with it and then at the same time prepare the right way and make sure we do our part," Koivu said.

The Wild went 8-4 under Dean Evason as the interim coach after Bruce Boudreau was fired, and Evason was awarded the full-time job on the first day of training camp.

"I always liked him," said Fiala, who played for Evason in the AHL. "He's a great communicator and a great coach."