Who should qualify for extra pay during the pandemic? Union says more workers should be eligible 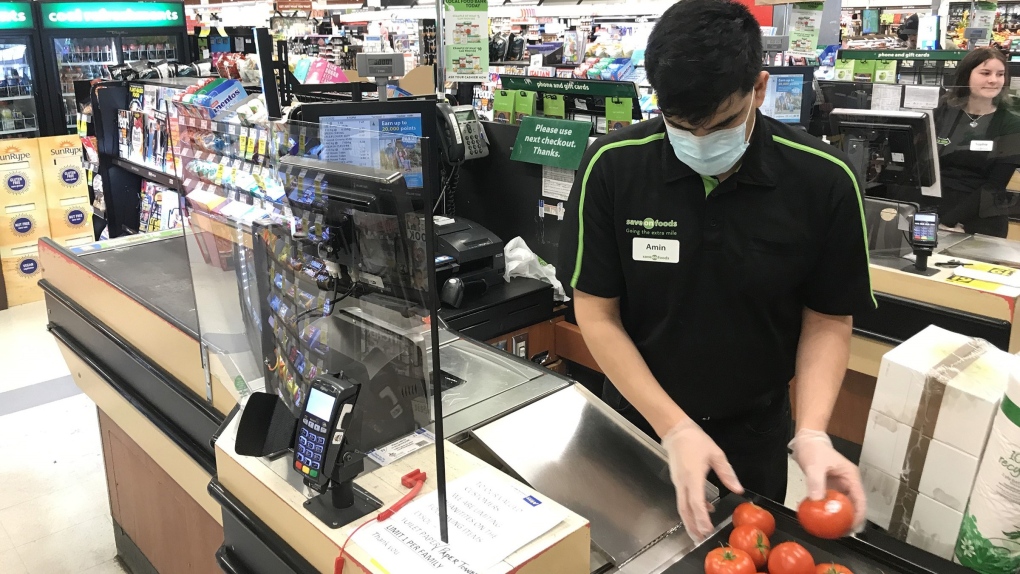 A plexiglass barrier is pictured creating a barrier to protect a cashier at a grocery store in North Vancouver, B.C., on Sunday, March 22, 2020. (Jonathan Hayward / THE CANADIAN PRESS)

VANCOUVER -- Last week, the province announced that certain residents would be eligible for extra pay as they work on the front-lines of the COVID-19 pandemic.

The temporary measure is meant to support employees in crucial fields where they are often unable to maintain physical distancing.

So far, that list includes those in the health-care sector, social services and corrections. But should it be extended?

In a statement, a union with more than 12,000 members in Western Canada called for funding for other critical workers.

MoveUp said many providing mandated services are left out of the provincial initiative.

"We understand that there is a finite amount of money available and that a line must be drawn somewhere, but the existing set-up leaves out far too many deserving workers," president David Black wrote.

Workers in other industries are still having to risk exposure at work, the union said.

Its list of examples includes those in public transit, security and utilities.

The union also mentions those in customer service, such as grocery stores that have stayed open.

And it says employees of ICBC and others who provide insurance and identification services are also playing a critical role during the pandemic.

The union added the extra cash cannot be seen as hush money – measures still need to be taken to ensure employees are safe at work.

"Benefits like the Temporary Pandemic Pay should be seen as recognizing the extraordinary efforts of these front-line workers who have kept our economy going during this challenging period," Black said.

"It cannot be a case of saying to these workers that we won't invest in their health and safety, but we'll give them a few extra dollars not to complain about it."

But the province's current set-up is specifically to support workers in three sectors, as they deliver in-person, front-line care.

Among the eligible include those working at hospitals and long-term care facilities, safe injection sites and emergency shelters, B.C. government service offices, correctional facilities and hotels being used for self-isolation.

Eligible workers will get an extra $4 an hour for a 16-week period.

The province estimated about 250,000 people will be eligible.

B.C.'s top health officials to give live update on COVID-19