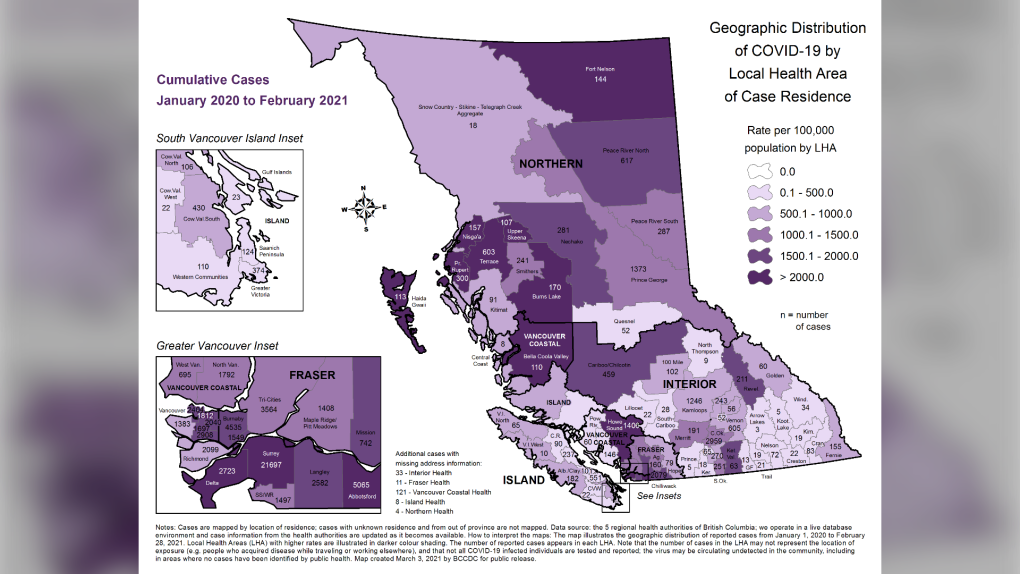 The map shows the location of nearly every case of COVID-19 recorded in B.C. since the pandemic began. (BCCDC)

VANCOUVER -- The B.C. Centre for Disease Control has released a new map of cumulative COVID-19 cases in the province.

The latest map shows the location of nearly every case of the coronavirus recorded in B.C. from January 2020 to the end of last month, as well as the number of cases per capita recorded in each of the province's "local health areas."

Because it shows both raw numbers and per-capita totals, the map is useful for identifying both the places in B.C. with the most COVID-19 cases, as well as the areas where the highest proportion of the local population has contracted the coronavirus.

Sometimes, as in the Fraser Health region, those two categories overlap. The local health area that includes the majority of the City of Surrey has recorded the single largest number of cases of any region in the province, with more than 21,000 since the pandemic began.

Surrey is also one of the regions with the highest density of cases in B.C., recording more than 2,000 cumulative infections per 100,000 residents.

Two other local health areas in Fraser Health have seen similar numbers of per-capita cases, but with much lower overall totals. The City of Abbotsford had recorded 5,065 cases overall, as of Feb. 28, while the City of Delta had recorded 2,723.

The local health area that corresponds to the City of Burnaby, meanwhile, has recorded significantly more cases than Delta, overall, with 4,535 as of Feb. 28. Despite this, the city's larger population means it hasn't yet reached the 2,000-per-100,000 mark.

Similar dynamics are at play in every health authority.

In Vancouver Coastal Health, the largest total caseload can be found in the local health area that roughly corresponds to South Vancouver. A total of 2,908 people had been infected with COVID-19 in that region as of the end of February.

At the same time, three other local health areas in Vancouver Coastal Health have been hit harder by the coronavirus on a per-capita basis. Those regions are the local health area that corresponds to Vancouver's Downtown Eastside, as well as the Howe Sound local health area and the Bella Coola Valley on the province's central coast.

Each of those regions have recorded more than 2,000 cases per 100,000 residents, despite having lower overall infection totals than South Vancouver.

In Northern Health, the Prince George local health area has confirmed the largest number of infections, with 1,373. That total only equates to between 1,000 and 1,500 cases per 100,000 residents, however.

Each of those regions has recorded more than 2,000 cases per 100,000 residents, despite having less than half as many total cases as the Prince George region.

In Interior Health, no region has yet reached the 2,000-per-100,000 threshold. The local health area with the highest number of cases is Central Okanagan, where 2,959 total cases had been recorded as of Feb. 28.

Three local health areas in Interior Health - Cariboo-Chilcotin, Revelstoke and Kettle Valley - have higher per-capita totals, topping out at between 1,500 and 2,000 infections per 100,000 residents.

Finally, in the Island Health region, per-capita caseloads remain lower than they are elsewhere in the province. The local health area with the highest number of cases since the pandemic began is Greater Nanaimo, which had recorded 551 infections as of the end of February.

That total works out to between one and 500 cases per 100,000 residents, the lowest per-capita total shown on the map.