Newly released data from the city shows nearly 90,000 people have lost their jobs, which is equivalent to 22 per cent of the workforce. The hardest-hit sectors include health care, social assistance, accommodation, food services, tourism and retail.

Businesses have also seen a revenue drop of 27 per cent, or about $2 billion, with about 13,400 businesses that have closed. Among those, 2,000 are in the hotel and food service industry and more than 3,000 are in health care and social assistance.

The results of a recent survey of Vancouver residents also showed more than 50 per cent of respondents would not feel comfortable going to a music venue or visiting a live sports venue until there is a vaccine. More than 30 per cent of respondents said they would feel comfortable going to a barber or salon now, but nearly 40 per cent said they would only visit if there was regular cleaning and physical distancing.

The details from the survey conducted by Research Co. were revealed in a news conference held by Mayor Kennedy Stewart on Thursday. The survey was conducted online from May 8 to 11 and has been statistically weighted according to Canadian census figures for age, gender and region in the City of Vancouver.

Stewart said one of the key takeaways from the survey is the difference in comfort levels between men and women.

"Women feel much less comfortable than men without frequent cleaning and distancing in these venues," he said. The survey found just over 50 per cent of men would feel comfortable going to a barber right now without any changes, and up to 80 per cent would go if there was physical distancing and regular cleaning in place.

"Women, however, only 10 per cent would go right now. If there's physical distancing and regular cleaning, you could get that number up to 50 per cent, but that is a significant reduction in the potential market there with these changes," Stewart said.

"Whatever industry you're in, your client base may be only 40 to 70 per cent of what it was without a vaccine,” Stewart said Thursday. "That again is something for business to consider. So, it's not only the reduction in space that would (happen) through physical distancing. It's also the reduction in the willingness of people to come into these establishments."

Financial impact of the virus on renters and homeowners

Residents were also asked about how the virus has impacted them financially. Stewart had previously warned that the city was losing about $4 million monthly because of the pandemic and had called on higher levels of government for assistance. He had also expressed concern about residents not being able to pay their property taxes.

Twenty-two per cent of respondents said they would pay none or only some of their property taxes, which the city said would result in a potential estimated loss of $121 million. The city says when added to COVID-19 revenue losses of between $110 and $189 million, it could see a revenue shortfall of between $231 and $310 million.

The majority of homeowners said they would be able to make their next mortgage payment, with 71 per cent saying they plan to pay all of it and just four per cent who plan to pay nothing.

So what happens next?

The city says its key takeaways include working with businesses to implement reopening plans quickly, but ensuring the plans are "women and senior friendly," as well as partnering with senior levels of government to build more rental housing.

"We really think that based on these data we should expand and extend relief programs with a renewed focus on women, seniors and renters," Stewart said. "Those are the folks that are being left out or not taking advantage … or being the hardest impacted by all this."

Stewart also said a priority should be put on women's return to the workforce, which would only happen if they feel comfortable enough coming back. 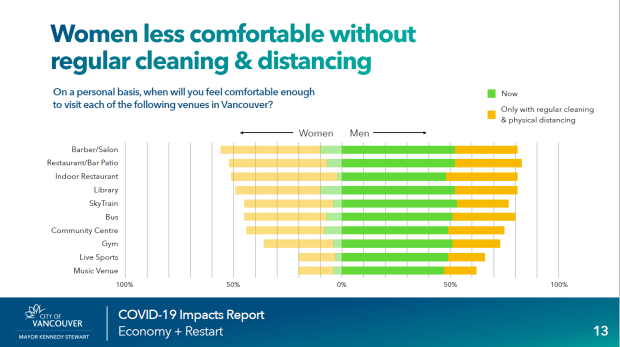 A previous version of this story stated that businesses had seen a revenue drop of $27 billion. The City of Vancouver issued a correction Friday, stating that the drop in business revenues was actually 27 per cent or about $2 billion.