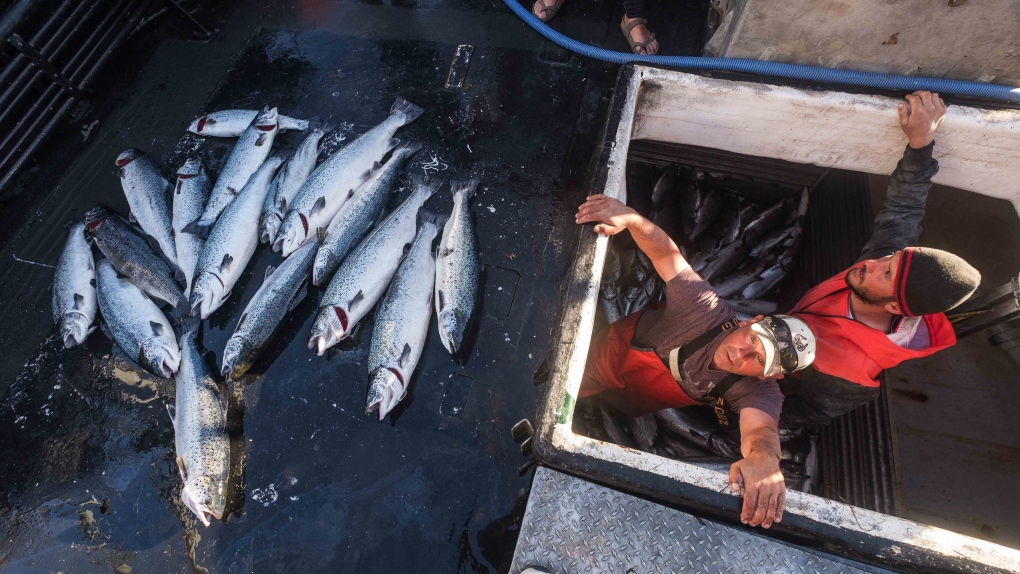 In this Aug. 22, 2017, file photo, Allen Cooke, left, and Nathan Cultee emerge from the hold of the Marathon after having separated out the 16 escaped, farm-raised Atlantic salmon they caught fishing off Point Williams, Wash. (Dean Rutz/The Seattle Times via AP, File)

SEATTLE -- Washington state will phase out marine farming of Atlantic salmon and other non-native fish by 2022 under legislation signed Thursday by Gov. Jay Inslee.

Net pens growing Atlantic salmon in state waters have operated for several decades but the practice came under heavy criticism after tens of thousands of non-native fish escaped into waterways last summer.

Inslee has said the risks are not acceptable given the high priority -- and hundreds of millions of dollars spent -- on bringing back declining populations of native Pacific salmon runs.

The legislation sponsored by Rep. Kristine Lytton, a Democrat, would end state leases and permits for operations that grow non-native finfish in state waters when current leases expire.

Top state officials said the escape of the salmon put the state's ecosystem at risk and fined the company US$332,000. Up to 263,000 invasive Atlantic salmon escaped into Puget Sound, raising fears about the impact to native Pacific salmon runs.

"While our company and our rural sea farming employees are deeply disappointed by the governor's decision to ignore the science and sign the bill, we will certainly respect the wishes of the legislature," Cooke's vice-president Joel Richardson said in an emailed statement Thursday.

He added that the company will "take the time we need to fully evaluate our operations and investments in Washington and explore all our available options."

Cooke currently holds two leases with the state that both expire in 2022. The state cancelled two other Cooke leases in recent months following inspections at those facilities.

Environmental groups and others cheered the legislation Thursday.

"This was a major step forward to restore the health of Puget sound and our wild salmon," said Kurt Beardslee, who directs The Wild Fish Conservancy.

The Washington Fish Growers Association had urged the governor to veto the bill, calling it a drastic measure to ban entire farming sector that would put hundreds of rural workers out of jobs.

Initiative activist Tim Eyman has filed two proposed referenda with the state that would put legislation phasing out non-native finfish farming to the people for a vote.

Last month, Richardson told state lawmakers that Cooke would be able to seek damages under a provision of the North American Free Trade Agreement if the measure passed. He said the bill would strip the Canada-based company of its $76 million investment and that previous American companies experienced major fish escapes but weren't punished in the same way.

At Thursday's bill signing in Olympia, Inslee partially vetoed a section of the bill. It said, in part, that the legislature would further study marine finfish aquaculture. Inslee said the section wasn't needed to implement the bill and he didn't agree with all the assertions made in it.

Marine aquaculture is promoted by the federal government and others as a sustainable solution to feed a growing demand worldwide for seafood. The U.S. currently imports about 90 per cent of its seafood and half of that is farmed, according to NOAA Fisheries.

John Volpe, associate professor of environment studies at the University of Victoria, said this month that there are too many issues.

"I've long argued that salmon farming in North America is in search of a problem. It comes with a boat load of issues. It's not easy to justify," he said.

Kenneth Warheit, who supervises the genetic and health laboratories for the Washington Department of Fish and Wildlife, said he thinks "that Atlantic salmon aquaculture in the state of Washington poses a low risk to our native salmon."