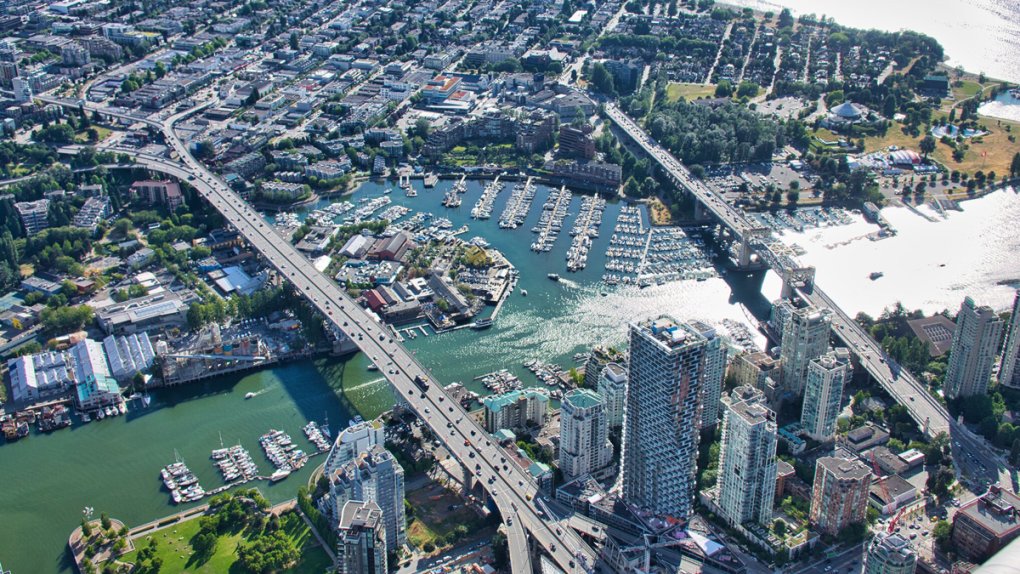 The Burrard Bridge and Granville Street Bridge are seen from the air in June 2019. (Pete Cline / CTV News Vancouver)

OTTAWA - The Canada Mortgage and Housing Corp. has lowered the vulnerability rating of Vancouver's housing market to “moderate,” marking the first change in three years as prices have eased.

The federal agency says in a report that “evidence of price acceleration” in Vancouver has eased to low, prompting a downrating after 12 consecutive quarters of being flagged as “highly vulnerable.”

“While home price growth over the past few years significantly outpaced levels supported by fundamentals, these imbalances have narrowed through growth in fundamentals and lower home prices in different segments of the resale market,” CMHC said in its latest Housing Market Assessment report.

The agency said a moderate degree of vulnerability remains at the national level, but imbalances between house prices and housing market fundamentals have narrowed over the past year. However, certain markets such as Toronto and Victoria are at higher risk.

Nationally, the inflation-adjusted average price decreased 5.6 per cent in the first quarter of 2019 from the same period a year earlier, the fifth-consecutive decline on a year-over-year basis, CMHC said.

In the previous quarter's report, CMHC lowered its rating for Canada's overall housing market from to moderate from high vulnerability - where it had stood for 10 consecutive quarters - as mortgage stress tests introduced last year made it harder for homebuyers to qualify and eased price acceleration.

The Canadian Real Estate Association's latest market forecast released in June projects that the national average price will drop 0.6 per cent by the end of this year to roughly $485,000, compared to the 4.1 per cent drop recorded in 2018.

However, the pattern is split between the eastern and western parts of the country. For example, while average prices are forecast to fall in British Columbia, Alberta and Saskatchewan, higher prices are expected in Ontario, Quebec and the Maritimes.

Dropping housing prices are a particularly welcome sight in Vancouver, which was cited in January as the second-least affordable major housing market in the world out of 91 markets by urban planning company Demographia. Vancouver came second to Hong Kong, but was less affordable than the likes of San Francisco and London, U.K.

The latest statistics from the Real Estate Board of Greater Vancouver showed that the benchmark price of a home in Metro Vancouver dropped to $998,700 in June, the first time it fell below the $1 million mark since May 2017.

The Bank of Canada in May also said that housing prices in the key markets of Vancouver and Toronto have cooled, but imbalances in real estate markets are still an important vulnerability for the overall financial system.

CMHC's bases its vulnerability assessment on several criteria including price acceleration, overvaluation, overbuilding, and overheating. It examines the degree of vulnerability and is intended to identify imbalances in the housing market.

Toronto, Hamilton and Victoria continue to have a high degree of vulnerability, but overheating, price acceleration and overvaluation show signs of abating in all three markets.