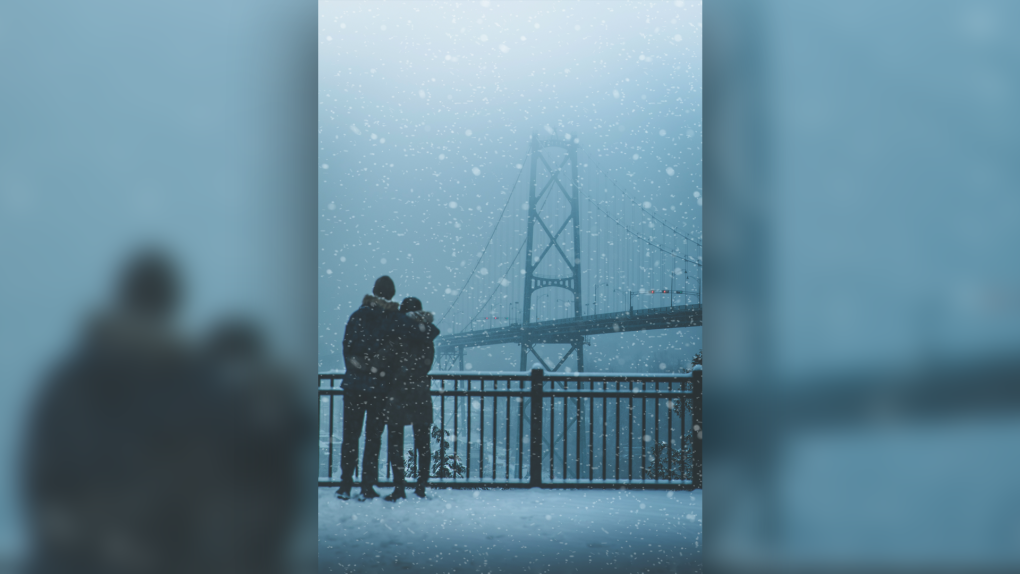 DESCRIPTION Used in internal listings and as fallback for alt-text in articles. Travel photographer Ben Glassco posted this image to Instagram as part of a public call to help him find the mystery couple he had photographed at Stanley Park on Saturday, Feb. 13, 2020. (Ben Glassco)

VANCOUVER -- The old saying goes, “a picture says a thousand words,” and photographer Ben Glassco needed fewer than 100 in a social media request to help him track down a mystery couple he took a picture of during a snow squall in Vancouver one weekend ago.

“Vancouver I need your help,” said the travel photographer in a video posted to Instagram on Feb. 17.

In the video, Glassco said he was taking pictures of Stanley Park in the snow at around 9 a.m. on Saturday, Feb 13.

When he got to the Lions Gate Bridge, he says, he found two people in a picturesque scene and snapped a shot of them.

“I found these lovebirds being adorable as hell…and I took this photo of them!” the photographer captioned the video.

Glassco says he is now turning to Vancouver’s online community to find the anonymous pair so he can give them the picture as a gift.

“I just want to give them a physical print to remember the day by, I really would like to gift this to them,”  Glassco told CTV News in an interview on Feb. 19.

He says the public support has been remarkable so far.

“I think it’s really, really cool everyone is getting behind this. I think we all want to find them,” he says.

The photographer described the couple in another caption on his Instagram post, saying they are tall with slim builds, white with dark hair, 25 to 30 years old and, he says, they were a bit quiet or shy.

They both appear to be wearing dark-coloured jackets with fur-trimmed hoods.

"I think its gotten to this moment where all of Vancouver wants to find this mystery couple," he says.