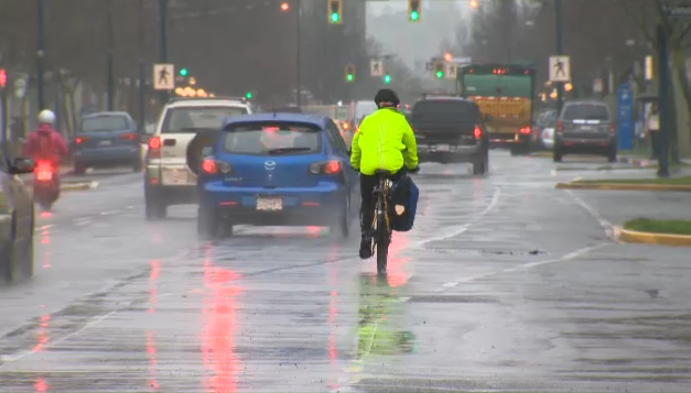 A cyclist rides in the Vancouver rain in this file image from 2016. (CTV News)

While it didn't finish as the top overall Canadian city, Vancouver has placedin the top 40 cities in the world to ride a bike.

The West Coast city, known for the number of its bike lanes, finished 37th out of 90 in the 2019 Global Bicycle Cities Index.

Overall, the Dutch city of Utrecht finished in the pole position, followed by Munster, Germany, while the Belgian city of Antwerp rounded out the top three.

Montreal was the highest-rated Canadian city, finishing in 18th place.

Sorry Torontonians – the nation’s largest city did not make the list.

The index was created by Coya, a European insurance company that specializes in bicycles and e-bikes.

The study first selects world cities well-known for cycling, as well as some cities committed to improving their biking infrastructure; they then analyze each city against a number of factors specific to cyclists, such as safety, bike thefts, accidents, fatalities, bike lanes, shops, sharing and rental stations and events like No Car Days and Critical Mass rides.

Vancouver finished with an overall score of 36.54, scoring strongest in the number of bike shops available, the number of shareable bikes per 100,000 riders and the overall quality of investment towards cycling infrastructure.

Comparatively, Quebec’s largest city had an overall score of 43.68. Utrecht finished with a 77.84.

Our neighbours to the south didn’t fare quite as well either: the top-ranked American city was San Francisco, which placed 39th on the index, followed closely by Portland, Oregon, at 41st overall.

Three cities where you may want to leave the bikes behind according to the index?

The Thai capital of Bangkok, Medellin in Colombia and the Nigerian city of Lagos pulled up the rear in the index.