With transit users across Metro Vancouver bracing for a full-scale bus and SeaBus shut down this week, some local universities are expanding services to help students get to class.

Unifor and Coast Mountain Bus Company met Tuesday afternoon for negotiations ahead of the union's planned shutdown. The two sides hadn't otherwise met since bargaining talks broke down on Nov. 14 and last week, Unifor announced plans to escalate to a full-scale strike.

If a deal isn't struck Tuesday, buses and the SeaBus won't run on Wednesday, Thursday or Friday. Service is set to resume Saturday, however.

That full-scale shutdown could be problematic for students who rely on transit, and commuters are scrambling for other options as all local universities say classes will still be in session in spite of the escalating job action.

"We recognize this escalation in job action will cause disruption for students, faculty and staff and we appreciate their concerns," says a statement from the University of British Columbia.

"Although strike action is ongoing, the university is operating as normal. Classes are proceeding and faculty and staff are expected to attend work."

Instead, the university recommends students make other travel plans to get to campus and to contact teachers if they're worried about missing class. Even though UBC says it won't have enough parking spaces to accommodate all new vehicles, it also says it's doing all it can to maximize parking capacity over the next few days.

Simon Fraser University's Burnaby campus is taking different steps to assist students in the event of a full-scale bus shutdown. There will be free, additional parking at the Burnaby campus and an additional community shuttle will help move people from those parking locations to the main campus.

Evo Car Share is expanding its "home zone" during the bus shutdown to include an area surrounding SFU's Burnaby campus as well.

"Evo has approval from the City of Burnaby to create a temporary home zone at the bottom of Burnaby Mountain," Evo said in a news release.

"This area stretches from Lake City Way Station to Production Way Station. Members can park in any legal parking spots in this area including (uncovered) meters."

For those heading out to Kwantlen Polytechnic University, in addition to its regular shuttle between Surrey, Cloverdale and Langley campuses, a shuttle will run between the Richmond and Surrey campuses. That shuttle will run from each campus every 45 minutes between 7 a.m. and 11:15 a.m., then every hour until 5:15 p.m. The trip between the two campuses is expected to take approximately 40 minutes. 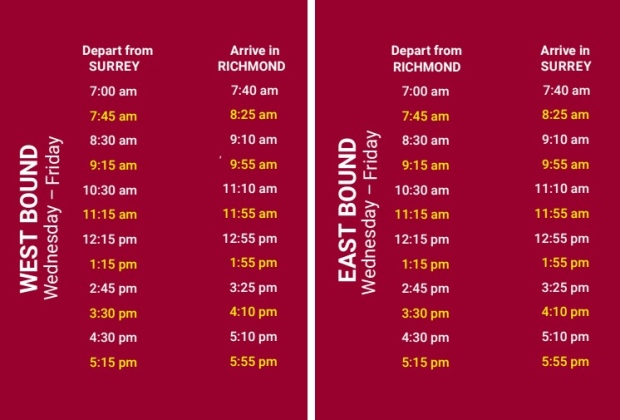 Both Emily Carr University of Art and Design and Langara College say their classes are running as normal. Capilano University did not respond with their plans in the event of a shutdown by publishing time.

Unifor and CMBC returned to negotiations at 2 p.m. Tuesday and have until 12 a.m. Wednesday to reach a deal before bus and SeaBus service is shut down.

Bargaining with @TransLink/Coast Mountain appears to be going down to the wire tonight. Take 2 mins to email the CEOs and tell them to get a deal with transit workers: https://t.co/srVClE2005 #transitstrike #vanpoli #bcpoli #bclab pic.twitter.com/Njz0ufFiY4