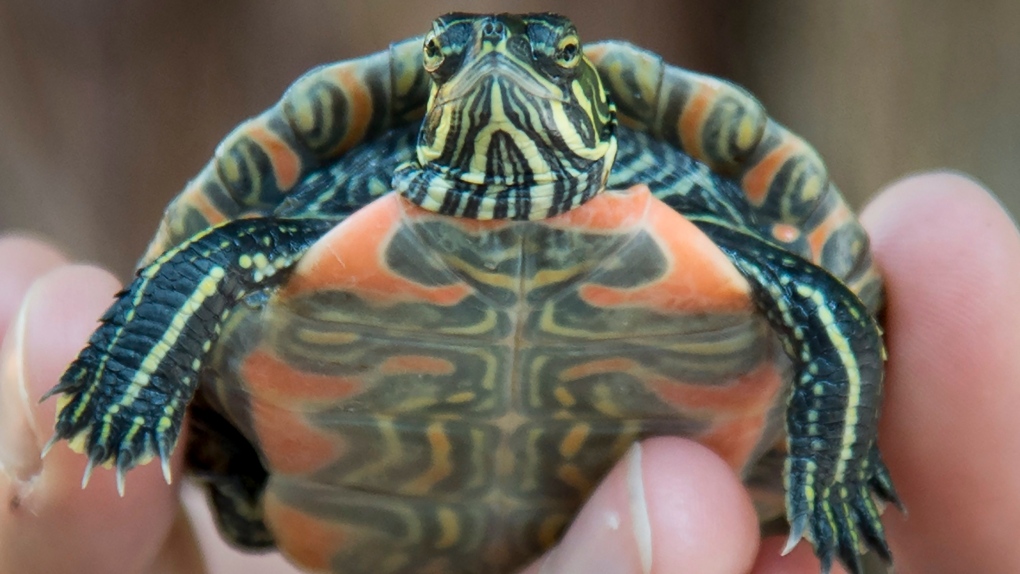 A turtle is held prior to being released into a pond in Langley, B.C., Tuesday, July 23, 2019. THE CANADIAN PRESS/Jonathan Hayward

LANGLEY, B.C. - The turtle in my hand dangles its churning feet as I set it down. It touches its first dirt and immediately, unerringly, points toward shore and races as fast as a turtle can to the water.

This turtle - a western painted turtle - has never been here before. It's never been anywhere other than in an aquarium or a plastic tub full of others.

It's being returned to an undisclosed pond near Langley, B.C., as part of captive breeding at the Greater Vancouver Zoo to help save an endangered native population. The program is one of a growing number across Canada, last-ditch efforts to stave off local extinctions of everything from butterflies to caribou.

“It works and it's a pretty important tool,” said Lance Woolaver, director of Wildlife Preservation Canada, which advocates for and assists such work. “It's definitely something we'll be doing more and more.”

Some fear captive breeding programs can become sops to a public concerned about species loss but not concerned enough to change how it acts.

“The misuse is that we will just seize upon these artificial ways to prop up a population and not address the habitat degradation that's let the species become endangered in the first place,” said Carolyn Campbell of the Alberta Wilderness Association.

Captive breeding programs vary widely. Some release young born to captive animals. Some collect eggs from the wild and return the hatchlings. Some, such as those currently under consideration for caribou, protect pregnant females until they give birth.

In Vancouver, turtle eggs are gleaned from the wild and hatched under glass.

“We watch the females come up on land and we can dig up their nests,” said Maja Hampson, who runs the program.

“Sometimes we get nothing. Other times we get six or seven nests, which is probably close to 100 eggs.”

The eggs hatch in incubators. Warmer thermostats tend to produce females; cooler ones, males. In about two months, tiny turtles about the size of quarters are chipping free.

The unique pattern of colours on their bellies is recorded. Microchips are inserted. After about a year splashing about with clutchmates in a big plastic tub, the palm-sized turtles are released.

And the challenges begin.

There are predatory and invasive bullfrogs. Red-eared sliders, a turtle sold at pet shops, push the native species off sunny logs where they digest their food. Western painteds also have an unfortunate liking for areas humans use - boat launches, beaches, parking lots.

Still, the team estimates about 75 per cent of the turtles survive. It's too early to know if they're becoming self-sustaining - turtles take seven years to begin reproducing and the program has only been going since 2012.

“What we're trying to do is establish new breeding populations in those habitats that are already there,” Hampson said.

“One of the tricky things is waiting for them to get to that age where they are nesting. A lot of them are still too young for that.” 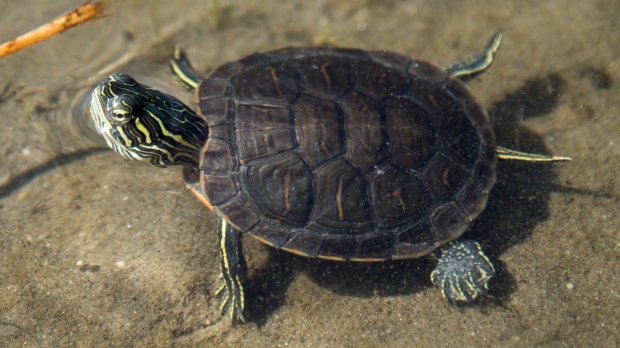 The Vancouver Zoo's turtle program is one of many involving dozens of species. The Calgary Zoo is involved with some form of captive breeding for at least six different animals.

Woolaver said there are probably about a dozen institutions with “really serious” programs - mostly with insects, birds, lizards and amphibians, although efforts for mammals such as the swift fox have had success.

The more the species nurtures its young, the harder it is to successfully reintroduce them, said University of Alberta biologist Cynthia Paszkowski, who has worked on frog-breeding programs.

“These animals don't have any social system. (The young) are pretty hard-wired to figure it out on their own.”

Captive breeding has its place, but only when things get dire, she said.

“This is something you do if you're fairly desperate.”

Habitat preservation has to come first, she said. Natural habitats are much more productive than re-creations and releasing captive-bred animals into a landscape where they can't find a home only dooms them.

“Everyone agrees that the most important thing is to preserve ... populations that are still in good shape and have healthy habitat,” Paszkowski said.

“The trouble is they need to survive when released and that is still a huge problem,” Campbell added.

Saving a pond, however, isn't quite as showy as releasing a baby turtle. “Just trying to protect habitat is often not very flashy,” said Paszkowski.

“A lot of the time the species is used as a flagship or umbrella species to help with the protection.”

Many species, such as the California condor or whooping crane, owe their survival entirely to captive breeding, Woolaver said.

Woolaver said most captive breeding programs cost between $100,000 and $120,000 a year. His group counts 53 species in Canada it would like to work with.

“There's far more money spent on paper clips in Canada than there is on wildlife recovery programs.”

“It makes little sense to save those that are clinging to life. That is probably not where you should put limited money for management efforts and research.

“If we want to save something, we're going to have to let some things go.”

But when you're holding a baby turtle in your hands that's straining toward its natural home, it's easy to forget those arguments. Marvel instead at how it instantly knows where the water is, wonder what it's thinking as it wades into its first real pond, hope it survives to help return its kind to where it belongs.