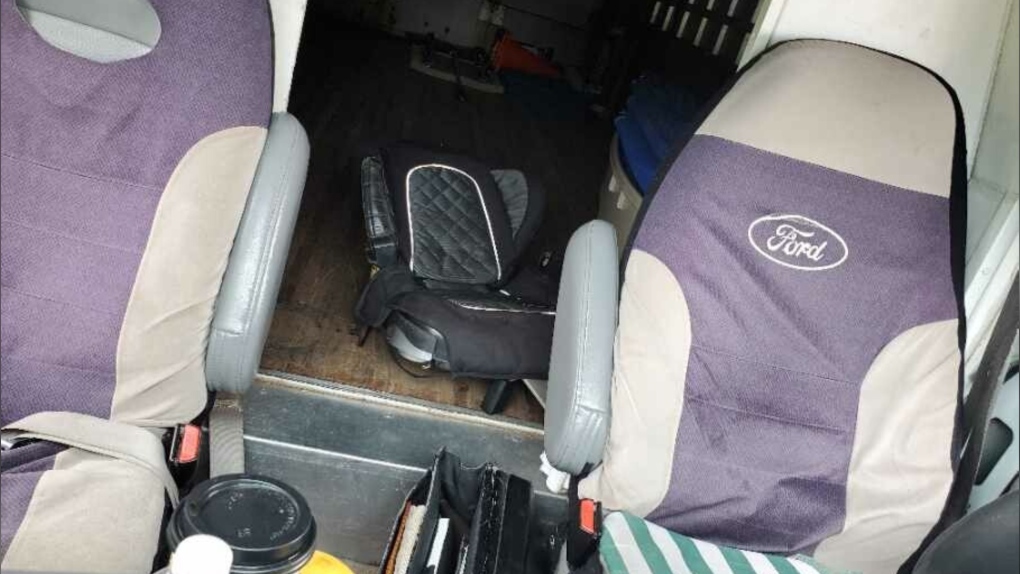 The officer flagged down the truck in question and found the third passenger sitting on a children's booster seat behind the driver and passenger. (Twitter/@BurnabyRCMP)

VANCOUVER -- One day after stopping a commercial truck that had a wooden block for a passenger seat, Mounties in Burnaby stopped another vehicle with unusual seating arrangements Thursday.

It happened near the intersection of Lougheed Highway and Kingsland Drive, where officers were checking over another truck as part of a four-day commercial vehicle safety enforcement blitz.

The officer doing the search looked up to see a truck coming towards him, and noticed something odd, according to Const. Kevin Connolly of the Burnaby RCMP Traffic Enforcement Unit.

"As a typical box truck, it would only have two front seats," Connolly said. "It's only able to handle two passengers. And when he looks at it, he sees three people in there."

The officer flagged down the truck in question and found the third passenger sitting on a children's booster seat behind the driver and passenger.

"It's not secured to the deck or to the car in any way," Connolly said. "There's no seat belt, nothing. That's how he's sitting."

The owner of the truck was issued a violation ticket for $598 for the improper seating arrangement. The extra passenger got out of the vehicle and took the SkyTrain home, and the truck was allowed to continue on its way, Connolly said.

He said Burnaby RCMP officers conduct commercial vehicle checks regularly - typically once or twice per month, with two or three major, multi-day blitzes each year. They also work with other police agencies across the Lower Mainland on safety enforcement in their jurisdictions.

The goal is not to issue lots of tickets or generate revenue through fines, but to improve safety, Connolly said.

He said the third passenger in the booster seat could have gone through the windshield if the truck got into an accident. The passenger also could have caused an accident if the vehicle stopped short and he fell forward into the driver.

"His life could have been in peril in many, many different ways because of how they chose to drive to wherever they were going," Connolly said.

While it's not common for officers inspecting commercial trucks to find an extra passenger seat or a wood block where one should be, Connolly said crews conducting such checks regularly find safety violations.

"There are good truck drivers," he said. "There are safe trucks. But there are also a lot of ones that are not safe to be on the road. As much as we do these checks - almost weekly - we do find very dangerous trucks at probably every single one of them."

"It is stops like this that essentially are going to prevent me from having to go and investigate a fatality," Connolly added. "It's going to make sure that both the public and these truck drivers go home safely at night."

Burnaby RCMP conducted their commercial vehicle safety enforcement blitz from Tuesday to Friday. Connolly said the detachment will be releasing detailed statistics on Monday to showcase what officers found.

On Day 3 of our CMV Check #CVSE stopped a commercial truck where instead of a wood block this time the extra adult passenger utilized a child booster seat, a $598 VT was issued to the owner and and the extra passenger left the scene on the skytrain #CMVSafety pic.twitter.com/BQi5pNf79C