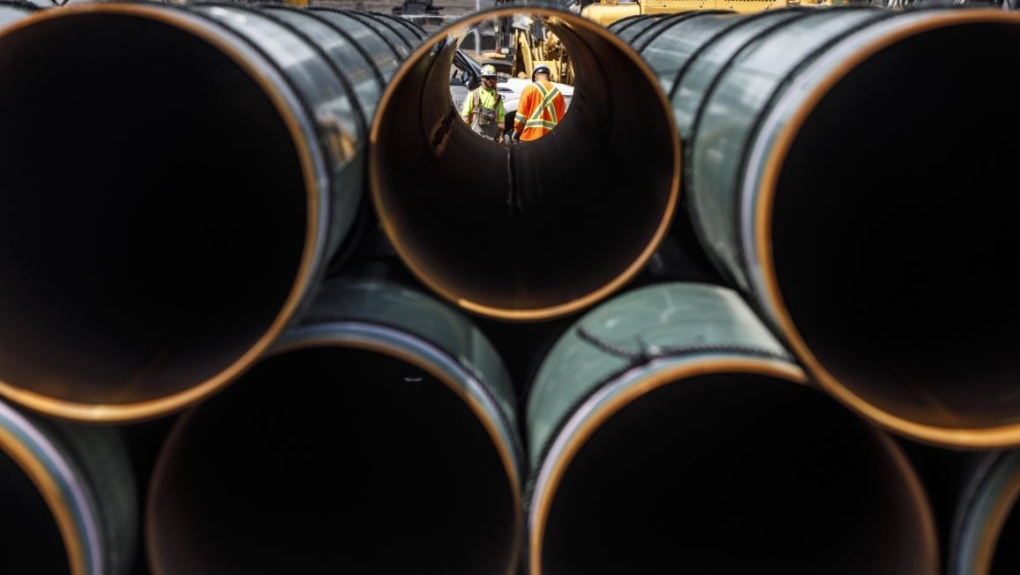 OTTAWA -- Expanding the Trans Mountain pipeline will now cost at least $12.6 billion - a major increase from a three-year-old estimate of $7.4 billion on a project that Finance Minister Bill Morneau insists the Liberal government still plans to sell back to the private sector.

"This was in the range of the considerations we looked at," Morneau said Friday in Ottawa.

"The project will deliver $1.5 billion of available cash flow once it's finished, which means it remains commercially viable and, I think, very interesting for the eventual commercial buyers that we're going to be seeking, because we don't intend on keeping this in government hands," he said.

Ottawa is also being told to set aside an extra $600 million in reserve to cover unforeseen expenses.

President and CEO Ian Anderson said about half of the cost increase was from delays and the other by design changes, such as adding thicker pipe in some areas and enhanced leak detection provisions. He said the project is expected to be in service by December 2022.

"Nor is it the one we last provided a cost estimate for in early 2017. It isn't even the one we envisioned as early as 2018 when our ownership changed. It's much, much more today."

The 2017 estimate of $7.4 billion was made by Houston-based Kinder Morgan, Inc., which sold the pipeline to the federal government in 2018 for $4.5 billion. The company said political risk that the project would never get built was too much to bear and was planning to halt the expansion.

Should Ottawa now be unable to sell the pipeline as planned, the total cost to federal taxpayers to buy and build the project would be $17.1 billion - a cost the Liberals defended Friday as necessary to get Canadian oil to new markets beyond the United States, and use the revenues to fund a transition to a low-carbon economy.

Alberta Environment Minister Jason Nixon suggested a backstop of $2 billion promised by the previous provincial NDP government was not on the table.

"At the end of the day, we see this as the federal government's responsibility," he said. "We're in this situation because of their political failure and we expect them to get the job done that they've promised Albertans."

Critics have attacked the project's greenhouse-gas emission and oil-spill risks, and charged it will be a money-loser because of unproved markets in Asia - making Trans Mountain fail financially and leave the public holding the bag.

"This should get back in the hands of the private sector immediately so that not a single tax dollar is spent to build this pipeline," Conservative natural resources critic Shannon Stubbs said. She called on the government to be transparent with taxpayers about costs.

The total cost could make it impossible for Ottawa to sell it to a new owner as planned, said Sven Biggs, climate and energy campaigner for Stand.earth.

"Any time a major project increases its cost by this much you have to hit the pause button and reconsider whether or not you're still getting value for the taxpayer," he said in an interview Friday.

Anderson said the pipeline will be a money-maker "every day through its contractual period of 20 years." He pointed out 80 per cent of the space on the pipeline is contracted to 13 clients, including domestic oilsands producers like Suncor Energy Inc. and Canadian Natural Resources Ltd., as well as international firms such as Total S.A. and a subsidiary of PetroChina.

Opponents of the pipeline expansion have vowed to do whatever it takes to stop the project despite losing a legal challenge before the Federal Court of Appeal this week. The four First Nations who lost the court challenge on Tuesday have 60 days to appeal to the Supreme Court of Canada.

The expansion project would triple the capacity of the existing pipeline between Edmonton and a shipping terminal in Burnaby, B.C. to about 890,000 barrels per day of diluted bitumen, lighter crudes and refined products.

New Democrat MP Peter Julian, who represents a Burnaby-area riding, said the Liberals shouldn't bankroll the expansion if they claim to be champions of the environment.

"There's already a pipeline ... that would be maintained, but the idea that we spend on top of that another $13 billion in construction when it is extremely controversial does not make sense," he said.

This report by The Canadian Press was first published Feb. 7, 2020.