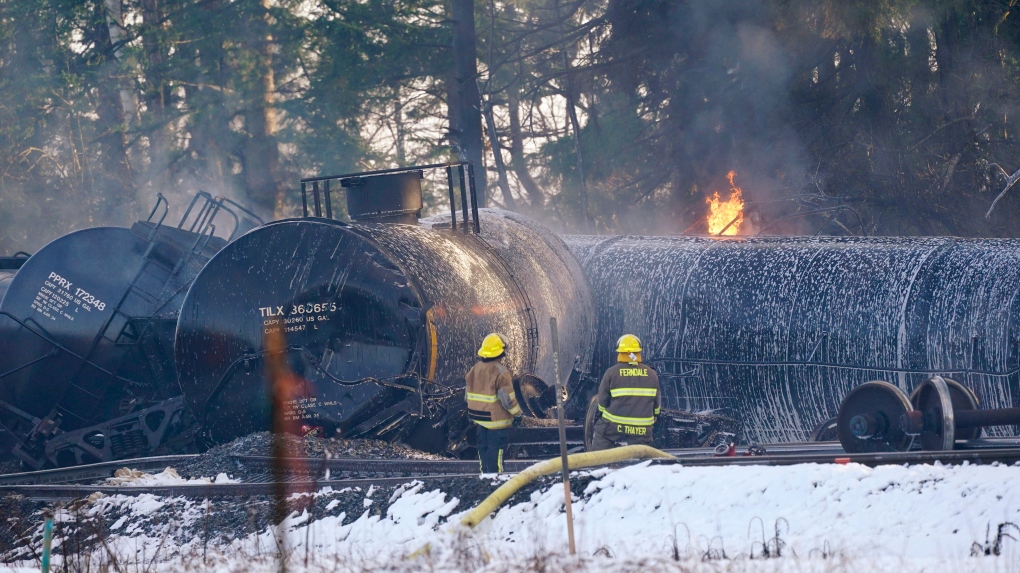 The derailment in the downtown Custer area closed nearby streets and spurred evacuation orders during a large fire response, Whatcom County officials said on Twitter. Interstate 5 was temporarily closed in the area in both directions.

Later Tuesday, the Whatcom County Sheriff's Office tweeted that the fires were under control and the evacuation order had been lifted but roadblocks would remain in place. Fires at the site remained active, the Sheriff's Office added, and residents were asked to stay inside once they returned home.

“Everyone's in danger at a scene like this, but fortunately there were no injuries,” Sheriff Bill Elfo said at a news conference.

Jenny Reich, who owns Whimsy Art Glass, was preparing to open her shop and told The Seattle Times that while she is accustomed to train noises, “all of a sudden it was a really big noise, and everything was shaking.”

Black smoke obscured her view, emergency personnel arrived, and Reich said she was advised to evacuate her business. She grabbed her wallet, keys and dog and left.

Home to five oil refineries, Washington state sees millions of gallons of crude oil move by rail through the state each week, coming from North Dakota and Alberta, Canada, according to the state Department of Ecology.

The seven cars derailed at about 11:46 a.m. Tuesday, BNSF Railway spokesperson Courtney Wallace said at the news conference. She said two people were on board the 108-car train headed from North Dakota to the Ferndale Refinery, owned by Phillips 66.

“BNSF is working with local authorities to assess and mitigate the situation,” the railway said on Twitter. “The cause of the incident is under investigation.”

The state Department of Ecology said a command centre had been set up at the scene with the railway and federal Environmental Protection Agency officials.

Matt Krogh, director of U.S. Oil & Gas Campaigns for the environmental group Stand.earth, is based in Bellingham near the derailment and told The Associated Press he could see the smoke. He said the incident was another example of how transporting crude oil by train - especially in large numbers of tankers - is “very, very dangerous.”

He cited the 2013 fiery derailment of a train carrying crude in Lac Megantic, Quebec, which killed 47 people, and a 2016 derailment in Mosier, Oregon, along the Columbia River that caused people to evacuate.

Krogh said crude oil is volatile and there are often track maintenance concerns. Among other things, Krogh and his group would like to see a reduction in the number of tank cars allowed per shipment.

“I think we got lucky today,” he said, referring to the derailment in Custer.

Democratic U.S. Rep. Rick Larsen, D-Wash., said in a statement Tuesday he was concerned about the derailment. Larsen is a senior member of the House Transportation and Infrastructure Committee.

“I worked closely with the Obama administration to create strong rules to make the transport of oil by rail safer,” Larsen said. “Clearly there may be more work to do.”

Custer, a small town of several hundred people, is about 100 miles (161 kilometres) north of Seattle.