Traffic diverted as B.C. bear snacks on apples while perched on thin branch

VANCOUVER – A "very fat" bear climbed a very thin branch for some crab apples on Monday, causing the tree to bend over the road with cars and cyclists passing below.

Volunteers with Maple Ridge Bears, a group dedicated to bear safety, went to help after seeing posts by neighbours on social media suggesting the bear might be stuck on the thin branch.

"Which of course wasn't true, the first thing bears learn how to do is get down a tree," said Susan Zanders with Maple Ridge Bears.

Nevertheless, the bear presented a safety hazard. He was dangling above 132nd Street in the Silver Valley neighbourhood, and could have caused a crash if he fell on a vehicle. Besides potentially injuring a driver, the bear could have also hurt himself.

Zanders, other volunteers, community members and members of Wildsafe BC came down to try and figure out what to do. They called in RCMP to help direct traffic, keeping drivers in the lane furthest from the bear. 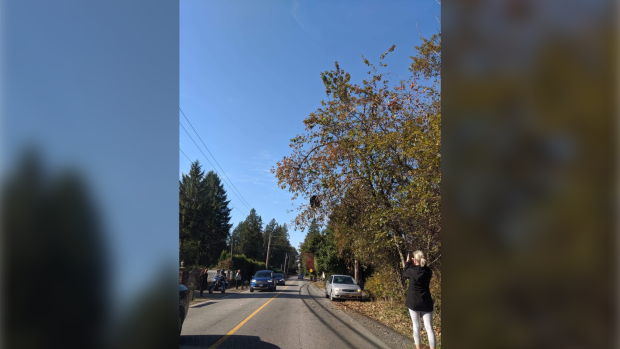 It was important not to scare the bear and send it running closer to the crowd that had gathered, Zanders explained. So they waited until the bear made its way down the tree on its own, and once it was on the ground volunteer arborists cut the tree down.

They got permission from the landowner to cut the tree, and placed the remaining branches filled with fruit in a nearby field to draw the bear away.

"This bear wasn't aggressive at all, he was a food opportunist," Zanders said.

But she wanted to remind residents to secure food sources that can attract bears, especially in the fall when bears eat as much as 20,000 calories a day to prepare for hibernation.

Bears that get used to venturing into neighbourhoods to find food may need to be destroyed by conservation officers eventually, she explained.

She also cautioned people not to stop and take photos if they see a bear, because crowds can stress bears out and acclimate them to humans—which they should remain scared of. The only people who should be taking photos of the animals are those with telephoto lenses so they can remain a safe distance away, Zanders added.

"This story could have ended differently. However, it has a very happy ending," she said. 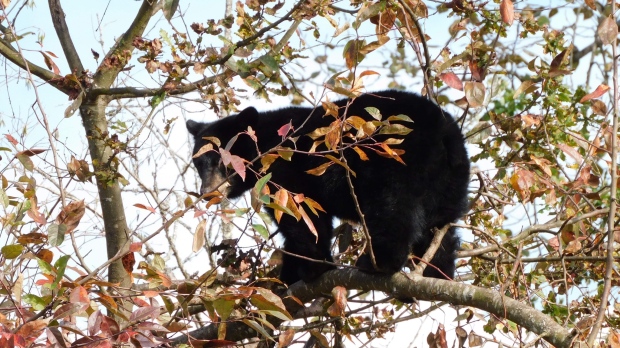