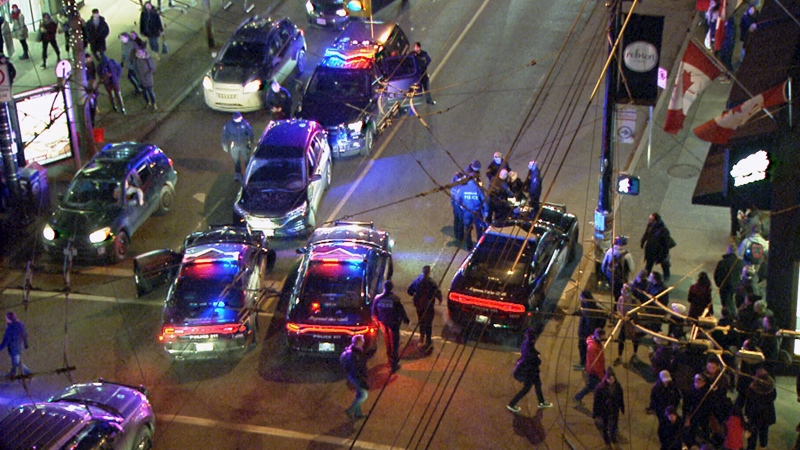 VANCOUVER -- When the Vancouver chapter of Black Lives Matter released a list of demands for the city last week, the very first item was to direct some funding away from the police department – an idea that's starting to gain traction in jurisdictions across North America.

But what does it mean, and how would it look in practice?

Black Lives Matter has not responded to an interview request from CTV News, but the group's statement on Friday called for the redirected funding to go toward "initiatives that demonstrably support long-term community safety," including mental health programs, restorative justice services, employment programs and more.

And for a department with a $340 million budget – which is about $140 million higher than it was a decade ago, and makes up 21 per cent of the city's overall spending – advocates argue there is plenty of room to pare down.

Doing so would represent a major shift in the city's approach to some of the most challenging issues faced by any municipal government, including drug addiction, and police have been quick to caution it could put public safety at risk.

But local groups who have been calling to decrease Vancouver Police Department funding for years argue their approach is actually based on common sense, and a recognition of historic and ongoing failures that can result from using police officers as a "Band-Aid" solution to complicated societal problems.

Data shows about a quarter of police incidents in Vancouver have a mental health component. But Meenakshi Mannoe of the Pivot Legal Society said officers are generally not equipped to deal with people who are in the throes of a mental health crisis, and sometimes do more harm than good.

"Police absolutely should not be front-line medical responders," she told CTV News. "We know, across Canada, that police attend these calls and their very presence is enough to escalate a situation."

Mannoe pointed to the fatal police shooting of Chantel Moore, a 26-year-old woman from the Tlaoquiaht First Nation on Vancouver Island. She died Thursday in New Brunswick after police were called to perform a wellness check on her.

There was also the shooting of Kyaw Din, a Maple Ridge man who lived with schizophrenia. He was killed back in August, one day after his family called police to ask for their help getting him to hospital.

Mannoe noted there are already many peer-led, grassroots organizations providing support in the city's Downtown Eastside that could do even more good with just a fraction of the VPD's funding. She pointed to the Vancouver Area Network of Drug Users and the PACE Society, which supports and advocates for sex workers.

"The folks who understand what people are going through are their peers," Mannoe said. "These groups are already doing the work of taking care of each other in the absence of state involvement. They're doing it in situations where their very lives are criminalized."

Under this kind of system, a resident who sees someone in a mental health episode, or drug episode, would still be able to call for help – but the people who respond would be specialists, not police, potentially with some kind of security backup at arm's length.

Advocates also want to see some of that police funding used to provide housing and make mental health treatment services widely available. They believe the suite of measures would go a long way in addressing the root problems that are traditionally, for better or worse, seen as necessitating a large police presence in the first place.

"So much crime is driven by inequality, by lack of basic income, by people living in poverty who need to resort to criminalized economies to meet their needs," Mannoe said.

Mannoe acknowledged that these are tough, unfamiliar ideas to many, but said she hopes people will use the current moment – when police violence and systemic racism have prompted waves of protests around the globe – to challenge their preconceived notions and listen to the perspectives of the groups working in their communities.

Locally, the idea already appears to be picking up some steam. An Instagram account called Defund VPD that was created five days ago has already amassed more than 3,000 followers.

An uphill battle to challenge the status quo

Regardless of how popular it becomes, any attempt to redirect funding from the Vancouver Police Department is sure to be met with pushback. When the city called for cutting just one per cent from the police budget, as part of an all-encompassing and desperate attempt to deal with the financial fallout of the COVID-19 crisis, the Vancouver Police Board balked.

"Protecting the well-being of the community through adequate resourcing of our police department is paramount, in particular during these uncertain times. We must steadfastly support our first responders in providing a responsive and effective police service for the people of Vancouver," the letter reads.

The letter also highlights the roadblocks any government would face in trying to reduce the department's budget – measures that were consciously implemented to avoid political interference in police work. Under the Police Act, the Vancouver Police Board submits its own provisional budget to council for approval, and if elected officials opt not to approve an item, the board can apply to the Director of Police Services to rule on whether or not it will be included.

Asked about the calls to divert funding from the VPD into other organizations, police spokesperson Sgt. Aaron Roed said he disagrees with the approach but that the department does support "community partnership" programs that combine the services of police and health care professionals.

He pointed to Car 87, which teams a constable with a registered nurse for mental health calls, and to Vancouver Coastal Health's Assertive Community Treatment (ACT) program, which police joined in 2012.

The program consists of five teams of 10 health care service providers, including psychiatrists and social workers, who support individual clients struggling with their mental health. Part of its purpose is to "reduce the number of contacts between police and severely addicted clients with mental health issues," according to a government summary, and it has seen some success. A survey of 32 clients reported that ACT teams brought their own "negative police contacts" down by 50 per cent.

"The VPD fully recognizes that addiction is not a criminal problem. It's a health issue. We continue to call for and support initiatives that get people the treatment they need when they need it," Roed said in an email.

"People call police for help every single day and we respond. I know my colleagues are stretched and the calls for service continue and have grown significantly over the last 10 years."

The head of the Vancouver Police Union told CTV News he's confident the vast majority of residents support the work they do, and that he views calls to defund the department as the work of "small interest groups."

"I think the agenda is because they want the money taken away from the police department and public safety and given to them to use as they see fit," Ralph Kaisers said.

He also argued the department, despite its increasing budgets, has been under-resourced in recent years. He noted the VPD, which expanded to 1,728 employees in 2019, has roughly the same staffing levels it had in 2009, while the city's population has increased by about 11 per cent since then. (The department also went through a hiring spree in the lead up to the 2010 Olympics, bringing on 151 new officers to reach an "authorized strength" of 1,715 sworn and civilian members.)

Not everyone dismisses the idea of defunding police as a fringe concept. City councillor Christine Boyle, who was disappointed by the board's reaction to what she called a "very reasonable" budget cut, said she's open to considering a different approach to dealing with certain issues in the community.

"I think there's an important conversation we can and should be having about what services are best provided by police," Boyle said. "As we continue to face budget pressures, I think we need to look closely at how we're best spending the money that we are responsible for."

And on Sunday, city councillors in Minneapolis – where George Floyd's killing prompted this wave of protests – announced their intention to disband their police department entirely in favour of a community-based approach to public safety.