'This will change my life': B.C. winner of $13M lottery jackpot eyeing new home in Caribbean 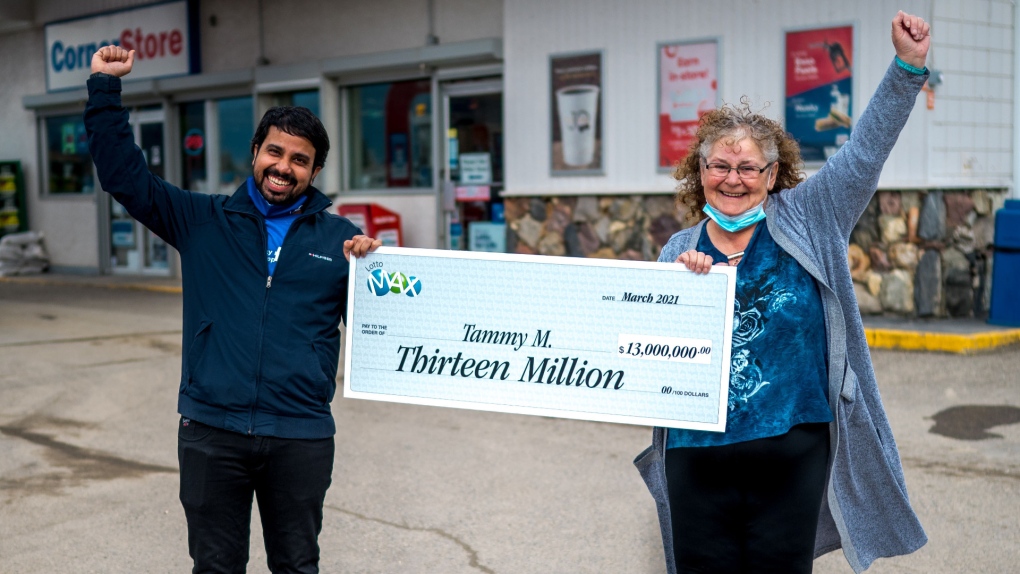 VANCOUVER -- A woman from the village of McBride, B.C., has just become the province's latest lottery millionaire – and she has some big plans for her new fortune.

Tammy Manning won a whopping $13 million after matching all seven numbers in the March 19 Lotto Max draw, and told the B.C. Lottery Corporation she's having the life-changing draw date etched onto her arm by her son, a tattoo artist.

"I told my son I won while he was in the middle of doing a tattoo," Manning said in a BCLC news release. "He said, 'There's no way mom – no you didn't!'"

After that, Manning said she's going to pay off her house in McBride, a small community of about 600 people – and then look at buying real estate in the Caribbean, along with a sailboat she can use with her partner.

She's also planning to share some of her newfound wealth with family – something Manning said means the most to her out of all of her plans.

"It feels so good that I'm able to help and do something good with it," Manning said. "This will change my life and it means I can retire and can help those close to me."

She purchased the ticket from the local Husky/Esso station, and returned to validate her ticket while Amber Bhaskar was working.

"She was about to fall down," he told the BCLC. "She's a loyal customer since we moved here – it's really happy to see somebody winning from the local town."

The odds of matching all seven numbers in a Lotto Max draw are estimated at an infinitesimal one in 33,294,800, according to the BCLC.

Earlier this week, lottery officials also announced a group of 11 coworkers from Surrey had come forward to claim a $32,700 win in the Feb. 6 Lotto 6/49 draw. Jerica Thomas bought the ticket on the group's behalf from the Circle K convenience store on 152nd Street, and said her colleagues couldn't believe their luck so she had to prove it using the BCLC Lotto! app.

"They all said, 'No way,' so I started to scan my ticket for everyone," Thomas said.

The BCLC recommends people who play as a group appoint one person to collect money, buy the ticket and share the results – and to keep a record of who has contributed to purchases.

There is a group play agreement form available on the lottery corporation's website.