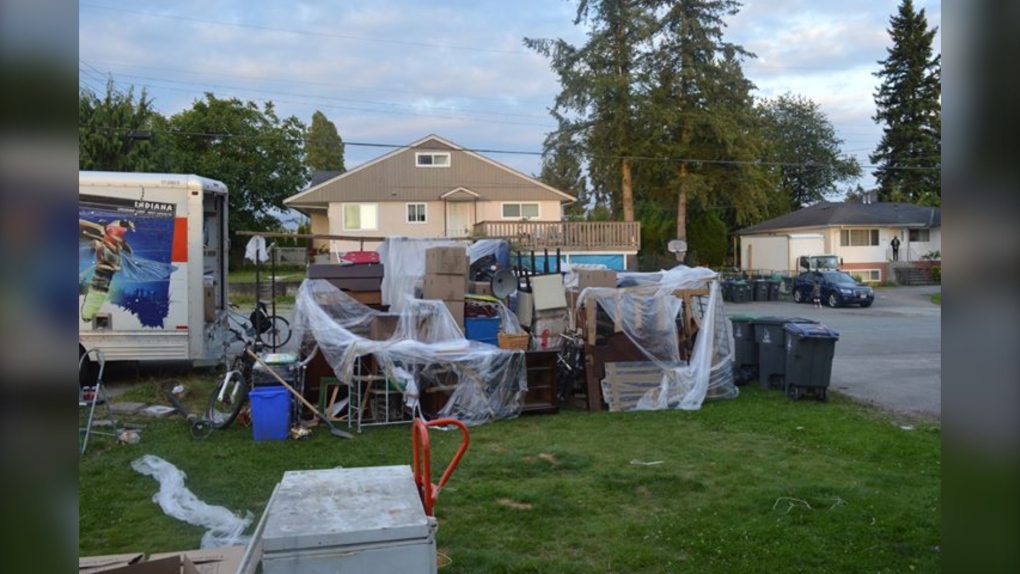 Possessions belonging to Jeff and Kim Sherman sit on the law on the duplex they had been renting for the last four years. The couple was evicted Friday because the new owner of the building intends to live there. (Facebook/Tammy Lynne)

VANCOUVER -- Jeff Sherman is desperately looking for a place to live.

The 54-year-old, his wife Kim and their eight-year-old Great Dane were evicted from their Surrey home last week.

"I have no idea what we're going to do," Sherman said in a phone interview, his voice breaking slightly as he spoke.

The duplex near 108 Avenue and 141 Street was recently sold, and the new owners say they want to move in, with their families, to both sides of the building.

Sherman told CTV News Vancouver his initial conversations with the new owners of the building had left him with the impression that he would be able to continue living there.

"They had almost promised me that I was going to be able to stay there, so I didn't look for nothing," he said. "Then, all of a sudden, one day, they showed up with an eviction notice."

That eviction notice came in mid-March, just as restrictions related to the COVID-19 pandemic were coming into effect, making searching for a new place to live a challenge.

While the provincial government initially banned all evictions during the pandemic, it has since allowed them to resume for most reasons, other than non-payment of rent. Landlord use of the property is one of the reasons for eviction that is now allowed.

Sherman and his neighbour, who still lives in the other half of the duplex while her case is before an arbitrator from B.C.'s Residential Tenancy Branch, challenged their evictions. They argued that the previous landlord sold the property to avoid doing RTB-mandated repairs, and that the new landlords had decided to evict them to avoid assuming the obligation to make such repairs.

The RTB found in favour of the landlords, granting them an order of possession for the property. On Friday, bailiffs came to Sherman's home to enforce the order.

Now, the family is searching for a new home.

"We've been looking and looking," Sherman said. "I tell you, with a Great Dane, it's impossible to find (anything)."

Much of the discussion around the eviction ban has focused on the economic hardship caused by COVID-19 and the inability of tenants to pay their rent.

When it announced the lifting of the ban on other types of evictions, the provincial government described the process as the start of a "phased approach" to allowing evictions again.

More recently, the province has announced that it plans to end the moratorium on evictions for non-payment of rent on Sept. 1, at which point tenants who owe rent to their landlords will have a year to pay it back on a fixed payment plan agreed to with their landlords.

The Vancouver Tenants Union criticized the government's plan, calling instead for the cancellation of all existing eviction notices and rent debt, as well as a continuation of the moratorium on all evictions and rent increases until the end of the pandemic.

"In a pandemic, even one infection caused by evictions is too many," said Mazdak Gharibnavaz, a member of the VTU's steering committee, in the group's response to the province's announcement. "We should fully expect a second wave to hit our province this fall as the ban is being lifted; now is not the time to play with the safety of tenants."

Sherman told CTV News he never missed a rent payment in the four years he lived in the duplex from which he was just evicted. That includes the rent that was due on July 1, he said.

His next apartment is likely to be more expensive than the $1,200 per month he was paying, but he has to find it first.

"We're looking for anything," he said. "I'd take a hole in the wall. We've got to find something."

He says the search has left him feeling abandoned by the provincial government.

"I think the government has given up on us," Sherman said. "There's no help for us. There's nothing. They say they've got all these organizations out for help, well, I tell you, I've been looking and meeting with people. There's no help."