Then and now: Images show how Vancouver has changed over time

Photos and video posted online this week show how the Vancouver area has changed over the last decades.

On Thursday, the Vancouver International Airport posted an archive photo of the grounds taken in 1946. They posted a second photo next to it showing a slightly wider view of the same area by air taken 72 years later.

Sharp-eyed Twitter users pointed out that part of an old runway that was built over before the 2018 photo was taken are still visible on Google Maps.

"Even when removed in places, it leaves a mark in the grass fields," user Carlos Silva wrote.

Can still see the bits and pieces left of the old tarmac that were built over. Via @googlemaps pic.twitter.com/ZT03pb4KhW

Another poster, with the handle @BenSimons28, referenced a Drake lyric: "Started from the bottom now we're here…"

The same day, Google posted a timelapse of Vancouver and the North Shore captured between 1984 and 2018.

The 37-second clip shows green space change and shrink as pavement and more buildings move in.

Across the Burrard Inlet, the area of residential and paved spaces expands in North and West Vancouver.

While one commenter posted about the green disappearing, another wrote that it felt like more had changed than was visible from the satellite.

The video is part of Google Earth's program called Earth Timelapse, which it describes as "a global, zoomable timelapse video of the entire planet."

Users can choose a location and click through year by year, or hit a play button at the bottom to watch the progression.

When hovering over Surrey, for example, the city's centre grows significantly in the 34 years visible through the tool.

The timelapse also features specific moments captured through timelapse, including the retreat of the Columbia Glacier.

Viewers can watch deforestation in Brazil, drying of the Aral Sea and the impact of irrigation in Saudi Arabia. Also among the options are mining projects in Alberta, urban growth in Myanmar, and the coastal expansion of Dubai. 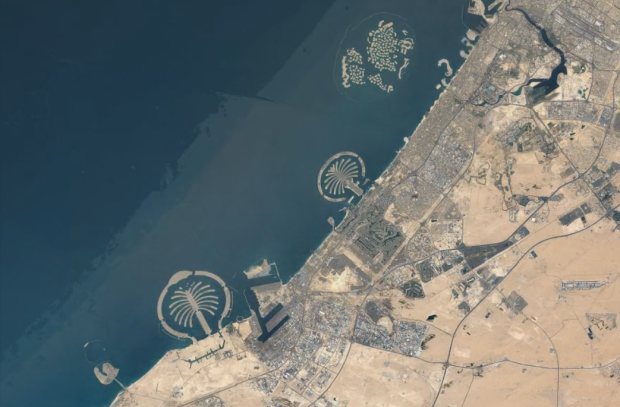 Viewing this article on our mobile beta site? Tap here for a compatible version, which includes embedded video.