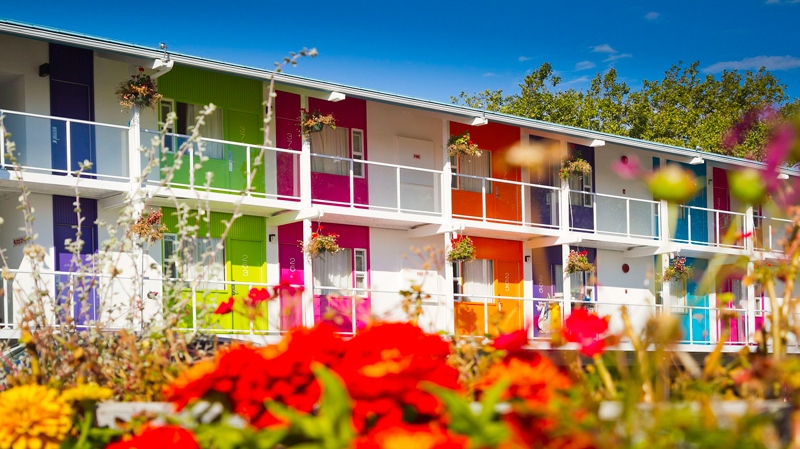 VICTORIA— When was the last time you played table tennis at a hotel? Or spent time in a hotel lobby listening to vinyl records on a state-of-the-art turntable while lounging in a purple chair that could easily accommodate a small family? When have you called room service using an old-school rotary-dial phone, or taken a ride in a hotel shuttle bus that is a 1967 orange and blue VW van?

Hotel Zed (pronounced the Canadian way) is the retro-kitsch dream of Victoria hotelier Mandy Farmer, whose idea of a hotel experience involves fun things for guests to do while they are staying in funky rooms decked out in purple, blue and black, geometrically challenged carpets, even brighter-coloured Jetsons-era furnishings and framed street-cred. Victoria graffiti tags on the walls.

In Pictures: B.C. hotel is a blast from the past

Farmer, who is president and CEO of British Columbia’s Accent Inns hotel chain, says Hotel Zed, which opened recently, is the happy ending to her decade-long vision of offering an edgy, eclectic, modern and retro accommodation experience in Victoria — one that rebels against the ordinary.

“I wanted to create a place that was fun,” says Farmer, 40, whose business card identifies her as a rebel and bike-lover.

“It’s ridiculously fun. This is really out there: the mix of new and old, but not just old.”

She says she pitched her cutting-edge Zed zeitgeist hotel dream to the bottom-line-conscious Accent Inns directors at annual planning meetings for at least a decade and always received the same firm answer: No.

“ ‘Mandy, give up! Move on! You’ve got to do something else. Why would anyone want to sit in an old car?’ was the answer,” Farmer recalls. “But I couldn’t stop dreaming about it.”

The conservative mood in the boardroom started to shift as the global economy struggled, and Farmer’s pitch for a new Victoria-vibe hotel concept was greeted with fresh ears at the executive level.

Two years later, and with at least $1 million invested, the 62-room Hotel Zed has risen from what was a traditional mid-town, street-front, box-like hotel that formerly served as an independent inn owned by the company.

Farmer stands outside the hotel lobby and points to the jagged, diamond-shaped façade.

“We had these hideous awnings covering this,” she says. “As soon as we took them off and I saw this, I knew we could do something with this property.”

The formerly bland white hotel wall that faces Douglas Street, Victoria’s main artery downtown, has been painted over with what resembles a Rubik’s Cube of pink, purple, orange and lime squares.

Farmer says the wall has become an unofficial photo studio as groups of people, including parade marching bands and wedding parties, stop to pose in front of the pseudo-psychedelic backdrop. Truckers have posted messages saying the wall’s burst of colours adds vibrancy to the city.

The rooms are equally colourful.

“If orange isn’t your colour, we’ve got the blue,” she says about the doors and walls. The carpets are multi-coloured and the drapes appear tie-dyed.

There are comics in the bathrooms.

Despite the homage to 1960s home decor, the rooms come with state-of-the-art Wi-Fi equipment that transmits what’s on your phone, tablet or laptop to the 40-inch TV in the room. There’s also step-by-step instructions on the proper use of the room’s rotary phones.

But there is no coffee in the rooms. Farmer says she wants guests to come to the equally colourful and interesting lobby for a cup and a chance to listen to some music — on headphones — play board games or type out a postcard on a manual typewriter.

Hotel Zed will mail the typed postcards home for free.

Farmer says she has visions of the lobby, which comes across as a comfortable living room from decades ago, and the table tennis lounge, complete with Wii games, serving as glorified rec. room for guests.

Outside, VW van driver Stan Yaxley, a retired transit driver with more than 30 years experience, honks his horn to summon another group of guests to pile into the van for a trip downtown.

Farmer says the room rates top out at $150 a night, with the average price being in the $100 range. Check out Hotel Zed at hotelzed.com.