An air quality advisory in place for part of the Lower Mainland has been lifted as the area begins to cool after several days of above-average temperatures.

A special air quality statement was issued for Metro Vancouver and the Fraser Valley on Thursday afternoon, but Environment Canada lifted the statement shortly before 3 p.m. Friday.

The advisory was issued due to high concentrations of ground-level ozone – formed when pollutants and solvents are emitted and react in the presence of sunlight – which could make it difficult for some to breath.

In the lower Fraser Valley, the air quality was worsened at times with particulates floating toward the area from a wildfire burning north of Harrison Hot Springs.

But Friday afternoon brought cooler temperatures and stronger winds through the area, which are expected to continue through the weekend, blowing the ozone away.

In Metro Vancouver, the forecast predicts a high of 22 C on Saturday and 25 on Sunday, but it may be as warm as 25 in inland areas.

Those in the Fraser Valley can expect highs of 25 C to 26 C, though it may feel warmer with the humidity, while Victoria residents will see cooler temperatures of about 23 C.

Further north, in Squamish and Whistler, weekend temperatures are expected to climb as high as 28.

Squamish was one of several regions where temperatures skyrocketed past previous records Thursday, with a high of 29 C. The old record for July 6 in Squamish was 28.5 C, set in 2011.

Temperatures skyrocketed to nearly 40 C in other parts of the province, like in Cache Creek where the high was 39.2 C. The previous record for that day, set in 1975, was 37.8.

Nelson broke a record at 38.8 C, as did Kamloops at 38.5. The oldest record broken on Thursday was in Vernon, where the mercury climbed to 36.9 C, 0.8 degrees warmer than the previous record set 111 years ago.

ICYMI: 20 New Temperature Records broken across BC yesterday!! Some dating back to 1890!! https://t.co/UqtSL6rKJv #Hot #BCwx pic.twitter.com/XcjoIvxoTd

Many of the areas where temperatures soared on Thursday are under special weather statements, which have been issued for an area spanning from the Fraser Canyon to Elk Valley. The statements warn that a ridge of high pressure will lead to a few more days of sweltering heat.

"Daytime maximum temperatures will reach the mid- to upper 30s through the weekend," the statement said.

Residents can expect some relief early next week as the high pressure system moves further east. Those in the area are advised to be wary of heat-related illness, especially in young children, the elderly, those working in the heat, people with chronic illnesses, those who live alone and the homeless.

Campfire bans in place across B.C.

While those who love the summer weather may be enjoying the heat, the hot, dry weather is adding to an increased risk of wildfire.

In just a few days, much of the province has gone from a state of moderate risk to extreme, thanks to weeks of sunshine.

Other than the northern-most regions, most of B.C. has not seen much rain since the first half of June, and there is no significant precipitation in the forecast for the next two weeks, MacDonald said.

As a result, the province has issued campfire bans affecting almost all of Vancouver Island and South Coast, and part of the Cariboo region.

On Friday, the ban was extended to include the Southeast Fire Centre. 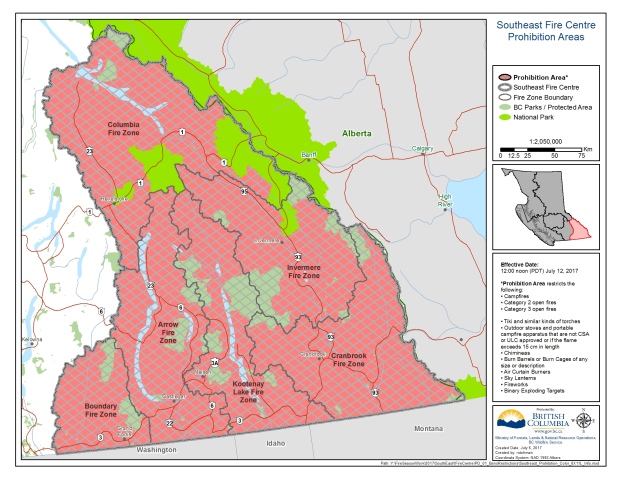 In the Coastal region, all open burning including campfires was prohibited as of Thursday, with the exception of Haida Gwaii and the area designated as a "fog zone" on the below map, along the western coast of Vancouver Island.

Open fires have been banned in the Cariboo region for weeks, and campfires were banned starting last Wednesday. 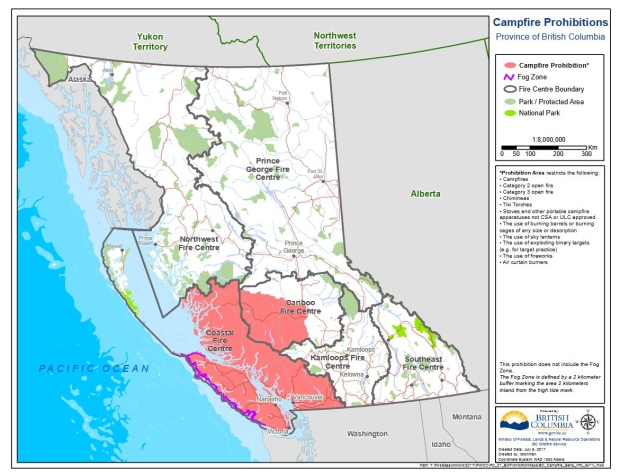 Officials said fire bans are likely to spread to the Kamloops Fire Centre next week. In both the Kamloops and Prince George fire centres, campfires are currently permitted but larger open fires are not.

The bans affect all B.C. parks in the regions, as well as Crown land and private property. Those convicted of violating a ban could face maximum penalties of $100,000 in fines and a year in jail. If an illegal fire is found to have contributed to a larger wildfire, the person who started the illegal fire could be forced to cover all firefighting costs.

For areas where there are no bans, BC Parks advises campers keep fires to a size no greater than 0.5 metres by 0.5 metres.

Campers should also keep something around to extinguish the flames in case a fire gets out of hand – like water and a shovel. Fires should be put out before campers leave the site or go to bed, and ashes should be cool to the touch.

With files from CTV Vancouver's Penny Daflos and Ben Miljure