Studies shed light on impact of virus on farmed Atlantic salmon in B.C. 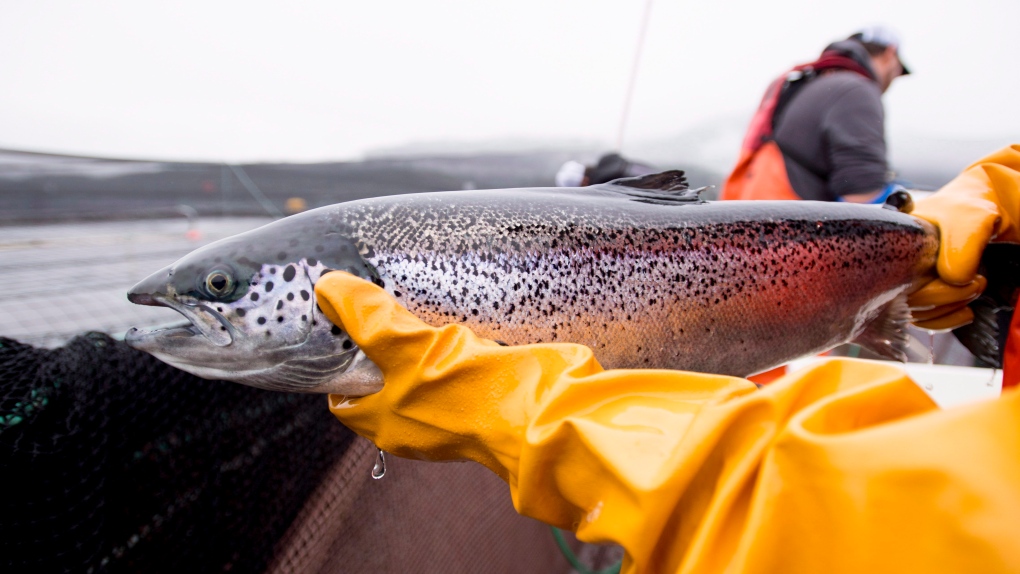 An Atlantic salmon is seen during a Department of Fisheries and Oceans fish health audit at the Okisollo fish farm near Campbell River, B.C. Wednesday, Oct. 31, 2018. THE CANADIAN PRESS /Jonathan Hayward

VANCOUVER -- Two new studies suggest a fish virus linked with a potentially deadly disease in Norway that has inspired an anti-fish farm movement on the West Coast isn't as harmful as some believe.

The studies were released Wednesday in the journals Scientific Reports and Frontiers in Physiology and review the effects of piscine orthoreovirus, also known as PRV, on Atlantic salmon in Pacific waters.

Studies in Norway have linked PRV with a disease known as heart and skeletal muscle inflammation, which does not affect human health but has killed Atlantic salmon farms in that country.

But Mark Polinski, a Fisheries and Oceans Canada scientist who was the lead and co-lead author on each study respectively, says they found the virus does not seem to have the same effect on Atlantic salmon studied in British Columbia.

While PRV could be a contributing factor to fish developing the disease, the study suggests it's not the sole cause and seems to cause less harm, Polinski said.

"With this data, it's kind of clearly showing you can't just blame it on the presence or absence of PRV," he said.

As part of the study, scientists injected healthy fish with the virus collected from an infected fish that also had heart lesions consistent with the muscle inflammation disease.

The virus load exploded in the healthy fish, but they didn't develop the significant heart lesions that the original infected fish had. Some developed minor heart inflammation but that also happened in the control population of healthy fish, he said.

The reason for the difference between Canada and Norway is still unknown but he said it could come down to genetic differences in both the disease and the fish.

"We're not trying to say it's not causing any harm at all," said Polinski, pointing to previous studies on the effects of the virus including one that linked PRV to an equally deadly type of anemia in at least one species of wild B.C. salmon.

"It's probably likely that PRV is not making the situation any better and very well may be contributing to it, but it's hard to pin it all on PRV."

Opponents of ocean-based fish farms have argued the muscle inflammation disease could spread to wild stocks, making them lethargic and vulnerable to prey.

There are still gaps in knowledge about how the virus and disease affect wild stocks, but Polinski said he recently completed a parallel study looking at whether PRV caused the disease in sockeye and could not prove any causation.

The federal government also announced Wednesday that it will not appeal a recent Federal Court decision ordering it to review its policy not to test young farmed salmon for PRV before the fish are transferred to open-net farms along the British Columbia coast.

Fisheries Minister Jonathan Wilkinson said the department is reviewing its policies in line with the court decision and results are due this spring.

"What the court found was the threshold the department is presently using to assess harm to wild salmon was set too low and asks us, me specifically, to go back and review the wild salmon policy to ensure that it was appropriate in terms of assessment of harm," he said in an interview.

The department is developing a risk framework that will clarify how risk is assessed and on what basis, he said.

Wilkinson said the court decision doesn't compel him to change the policy not to test for PRV ahead of a transfer, but the department will make decisions on that and other aspects of its policy using the best scientific information available.

The 'Namgis First Nation challenged a Fisheries and Oceans Canada authorization transferring Atlantic salmon smolts to an open-pen aquaculture facility in Vancouver Island's Broughton Archipelago without being tested for PRV or another serious disease. An appeal of that authorization is still before the courts.

Fisheries and Oceans says its officials are working to ensure the aquaculture sector is economically successful and environmentally sustainable.

"At the end of the day, aquaculture is a significant economic opportunity for British Columbia and Atlantic Canada, but we only get there through a path where people believe it is being done in an environmentally sustainable way," Wilkinson said.

The department is continuing a study of on-land and sea-based closed containment fish farming technology that could keep farmed salmon out of waters shared with B.C.'s wild stocks, reducing the potential for the transfer of diseases. It says the study's results are expected this summer.