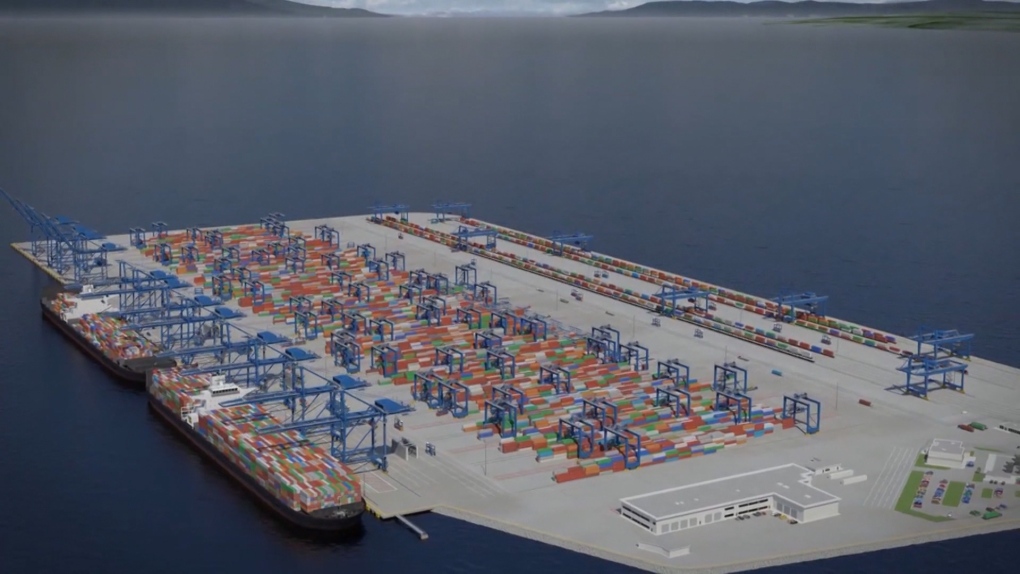 A rendering of the Robert Bank Terminal 2 project. Source: Port of Vancouver

Four First Nations from the U.S. are voicing their opposition to the expansion of the Roberts Bank Terminal.

They're expressing their concerns at the Canadian Environmental Assessment Agency hearings, which are being held in Delta.

The tribal groups are upset with the proposed project, called the Roberts Bank Terminal 2, which is located just south of the U.S.-Canadian border in Delta.

They travelled to the hearings to ask for the Canadian government to obtain "free, prior and informed consent" of Indigenous peoples, including those from across the border.

"We're here to protect Mother Earth. We're here to protect her species that provide us food for our people. It's not only us. It's for each and every one of you, and your children and your grandchildren that are coming behind you," said Tsilixw (Bill) James, Hereditary Chief of the Lummi Nation in Washington State.

The Coast Salish Nations said aside from an increase in vessel traffic and pollution in the area, they’re worried about their people’s ability to fish for salmon while also protecting the killer whale population.

"Our tribe is committed to protecting our fishing traditions," said Leonard Forsman of the Suquamish Tribe.

"We need to stop the stressors. Stop the bleeding," said Raynell Morris of the Lummi Nation.

Hearings began in mid-May, which are looking at the expansion of the terminal. If approved, the terminal would double its shipping capacity.

Several groups have been represented at the hearings, expressing their support or apprehension for the proposal.

The Vancouver Fraser Port Authority said it’s their mandate to listen to all sides, especially when it comes to fears surrounding the environmental health of the region.

"We're confident the project can be built and address those concerns," said Duncan Wilson with the Vancouver Fraser Port Authority.

The expansion of the terminal would see the capacity to handle more than 2.4-million standard-sized shipping containers a year.

"For example, the number of container vessels that would be calling the port with or without this terminal project will remain the same, because vessels are getting larger, and larger, newer vessels also have a smaller environmental footprint," Wilson added.

The tribal groups are asking for a proper environmental assessment to be done prior to approval, if granted.