Spooked by Halloween fireworks, this dog's paws are now so injured she can't stand

VANCOUVER - The owner of a dog who was badly injured after she ran away from fireworks on Halloween night says he'll be speaking in support of a ban on consumer fireworks at city council next week.

“Right now I would be the biggest advocate for (a ban) right now because of what I just went through with my puppy,” said Edward Reyes.

“No pet should have to ever go through that.”

Evie is now recovering at home after her adventure, which left her with a bruised and cut face and so much damage to the skin of her paws that she cannot stand.

Evie’s ordeal started on Halloween night, when Reyes brought her outside to relieve herself at around 9:30 p.m. The dog and her owner were in the backyard when someone let off a particularly loud firework in Fraserview Park, right beside Reyes’ house.

Evie was on a leash, but the puppy was so startled and frightened by the loud noise that she broke right through the collar and raced off into the night.

Reyes and his wife searched for Evie all night long, at first on foot and then by car. At dawn, Reyes came back home and decided to post a message on a website for lost pets, Pawboost.com.

Nathaly Cely responded to Reyes’ message. The Vancouver resident had been able to call the frightened dog when it ran into her yard near 62nd Avenue and Knight Street.

“She was bleeding a lot and there was a lot of blood on the floor,” Cely said. “We were looking for the owner, but we couldn’t find anyone.”

After posting on a Facebook group for lost pets and getting some advice, Cely took the dog to an animal hospital on West 7th Street. The next morning, members of the Facebook group noticed Reyes’ Pawboost.com post and alerted Cely, and Reyes was finally reunited with his dog.

Reyes and Cely can only guess at how Evie scraped the skin off of her paws, but they think it may have been because she ran for so long and so frantically, or possibly because she ran across a fence or other obstacle.

"There was a lot of blood…and she couldn’t even walk," Cely said. "It was so sad to see her like that." 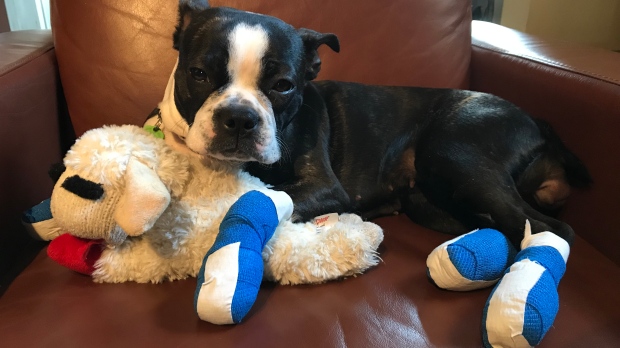 Evie is now recovering at home after she injured her paws when she ran away from fireworks on Oct. 31.

Vancouver city council will debate a motion to ban consumer fireworks on Nov. 5. Setting off fireworks on Halloween is a tradition in the Vancouver area, but pet owners and fed-up neighbours say the fun of amateur fireworks just isn’t worth the risk to people and pets.

Cely is originally from Colombia, where consumer fireworks have been banned for many years because so many people were injured by them.

“When I moved here, I was so surprised that it was allowed for just regular people to use fireworks,” Cely said.