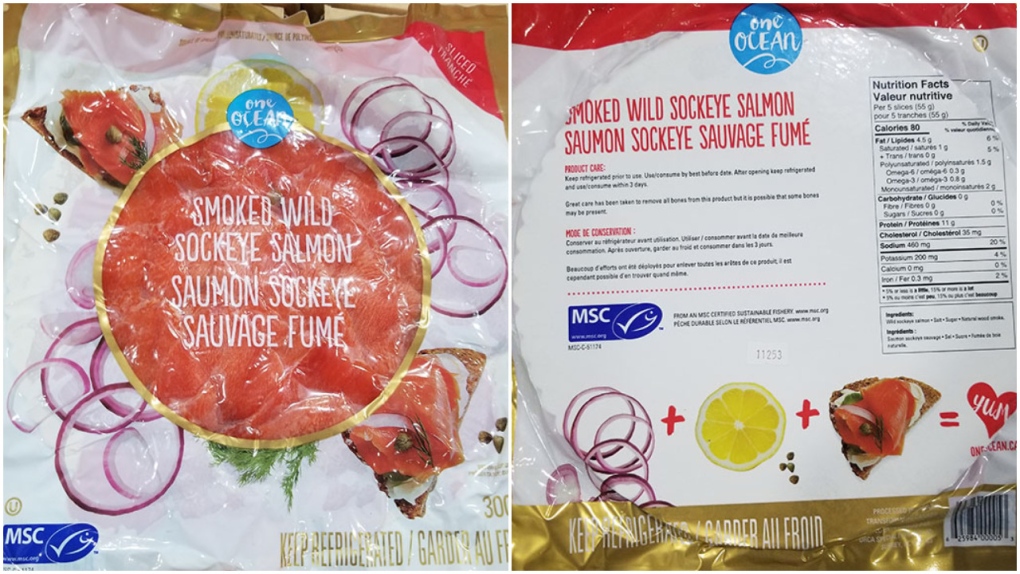 A recalled smoked salmon product is shown in images provided by CFIA.

VANCOUVER -- A smoked salmon product sold in British Columbia is being recalled due to risk of contamination with the bacterium listeria monocytogenes.

The recall was triggered in late January, following a Canadian Food Inspection Agency inspection, and was expanded Wednesday to include products sold to consumers.

The expansion followed a food safety investigation led by the agency.

As a result, One Ocean brand Sliced Smoked Wild Sockeye Salmon is being recalled from the marketplace.

The product is made by Orca Specialty Foods, Ltd., and comes in a 300-gram package.

According to the CFIA recall alert, the affected products should not be eaten. Instead, the salmon should either be thrown out or returned it to the store where it was purchased.

So far there have been no reports of listeriosis, a serious infection caused by listeria, but those who think they may have become sick from eating a recalled product are asked to contact their doctor.

Food contaminated with the bacteria may look or smell normal, but can still cause illness.

Pregnant women can be particularly at risk. While their symptoms may be mild, the infection can lead to premature delivery, spread to their newborn or cause still birth.

Also at risk are the elderly and those with weakened immune systems.