Slow down: After catching 3 excessive speeders in a row, Burnaby RCMP warn of hefty fines 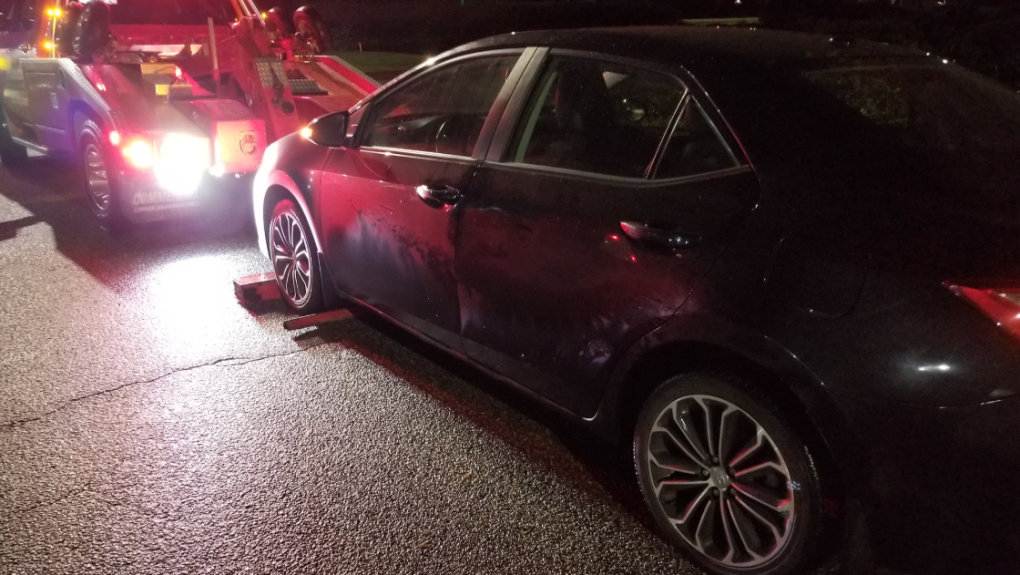 One of three vehicles Burnaby RCMP impounded on Dec. 28 after the drivers were caught speeding excessively. (Burnaby RCMP)

VANCOUVER -- Burnaby RCMP say drivers need to slow down after traffic enforcement officers caught three drivers in a row driving up to 86 km/h faster than the posted speed limit on Marine Way on the weekend.

The Burnaby detachment posted photos on Twitter of three cars being towed away after they were ticketed, one after the other, around midnight on Dec. 28, and impounded for seven days.

Tonight one of our Traffic Enforcement Officers stopped 3 drivers in row doing 98, 102 and 136 km/hr in a 50 km/hr zone entering a residential area. Each driver recieved a excessive speeding ticket and a 7 day vehicle impoundment #RoadSafety pic.twitter.com/iMn7tt1iLL

The drivers were clocked doing 98, 102 and 136 km/h in a 50-kilometre zone as they travelled west on Marine Way at Joffrey Avenue, just before Boundary Road, according to Burnaby RCMP.

In that area, the speed limit changes from 70 km/h to 50, and traffic cops frequently catch people going way over the speed limit. New apartment buildings have recently been built in the area and the neighbourhood is becoming more residential, so increasing traffic safety is a priority, according to Burnaby RCMP.

Drivers caught driving at excessive speeds will face hefty traffic fines, as well as the seven day loss of their vehicle, RCMP warn: excessive speeding is defined as going 41 to 60 kilometres over the speed limit. The two drivers who drove 98 and 102 kilometres in the 50-kilometre zone got a $368 ticket, while the driver caught going 136 km/hgot a $483 ticket.