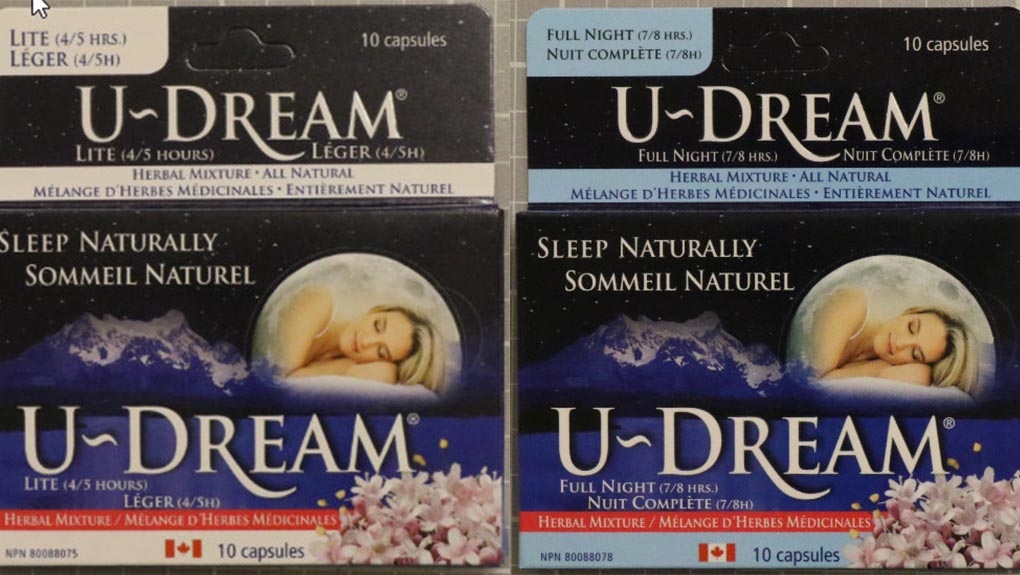 VANCOUVER -- Health officials are warning the public about a sleep aid product that's advertised as "herbal" and "all natural" but might contain more than the label lets on.

Health Canada said it tested a number of U-Dream products, which are available over the counter, and detected a substance that's similar to the prescription insomnia drug zopiclone.

Zopiclone "may pose serious health risks," according to the agency, and should not be given to pregnant or nursing mothers, children or anyone who is experiencing breathing trouble.

The drug is also potentially habit forming, and ongoing use can lead to dependency.

Regular side effects include drowsiness, dizziness, memory loss, hallucinations and abnormal sleep behaviours such as "sleep-driving" – which is like sleep-walking, only much more dangerous.

Officials said they decided to test U-Dream after users complained about unusual side effects from the products, which raised suspicions they might contain something that's not listed on the box.

As a result of the subsequent investigation, Health Canada has suspended all U-Dream product licences, making it illegal for any person or business to sell the products anywhere in the country.

Officials have also asked the company behind the products, Biotrade Canada Ltd., to issue a recall.

To avoid any potential withdrawal symptoms, U-Dream users have been advised to consult with a doctor before going cold-turkey. Health Canada said users should also avoid driving, operating heavy machinery or any other activities that require mental alertness until they have safely stopped using the products.

A full list of the affected products, including their Natural Product Numbers, is available on the Health Canada website.