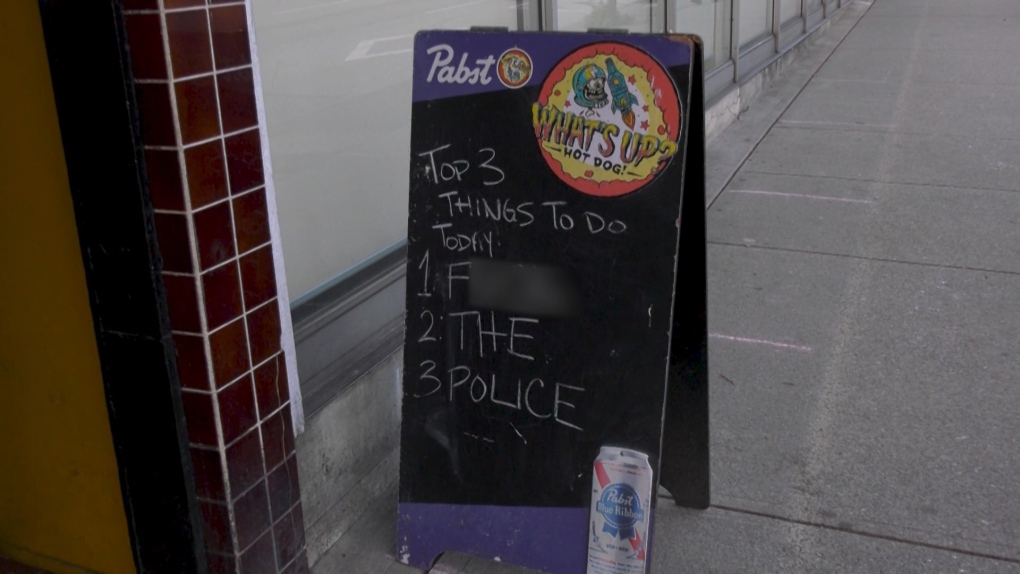 A staff member at the restaurant told CTV News they stand behind the message on the sign.

VANCOUVER -- Calling a sandwich board “entirely irresponsible,” Sleeman Breweries announced it has ended its sales relationship with Vancouver restaurant What’s Up? Hot Dog.

“This is a time for reflection and action when it comes to fighting the injustices brought on by anti-Black, anti-Indigenous and anti-LGBTQ+ racism,” wrote Sleeman Breweries customer services representative Jim McIntyre in a statement.

McIntrye said the message on the sandwich board was an "unhelpful distraction to the many marginalized voices that need amplification now."

"As such we have made the decision to no longer sell our beer at this account."

That sandwich board message upset some passersby last week. One side read “top things to do today,” followed by a numbered list: “1. Fuck 2. The 3. Police.”

In a statement to CTV News Vancouver, the restaurant admitted the sign was antagonistic but said “it represents the anger felt by us and many others in the community.”

“If it made anyone uncomfortable, we encourage them to look into these issues; the resources are plentiful online,” the statement read.

“There are different views of police and we all know that, signing-up for this job,” said Vancouver Police Department spokesperson Const. Tania Visintin. “You take it with a grain of salt. It’s not going to change what product we put out there for the citizens. We’re going to keep protecting the citizens, we’re going to keep responding to calls.”

A recent tweet by patrol Sgt. Sandra Glendinning sums-up some of the negativity officers have experienced over the past few weeks, and is resonating with members of the VPD.

“I’ve been a police officer since 1995. Never have I felt such hatred toward my profession as in recent weeks” read Glendinning’s tweet. “It hits me to my core.”

I’ve been a police officer since 1995. Never have I felt such hatred toward my profession as in recent weeks, and it hits me to my core.

That said, I will continue to move forward knowing the majority of officers do this job the right way and for the right reasons. #VPD

At the same time, the Vancouver Police Department acknowledges there’s a call for change.

“As time progresses, change is good,” said Visintin. “I know our management is going to be sitting down and looking at ways to change and to progress as a department.”