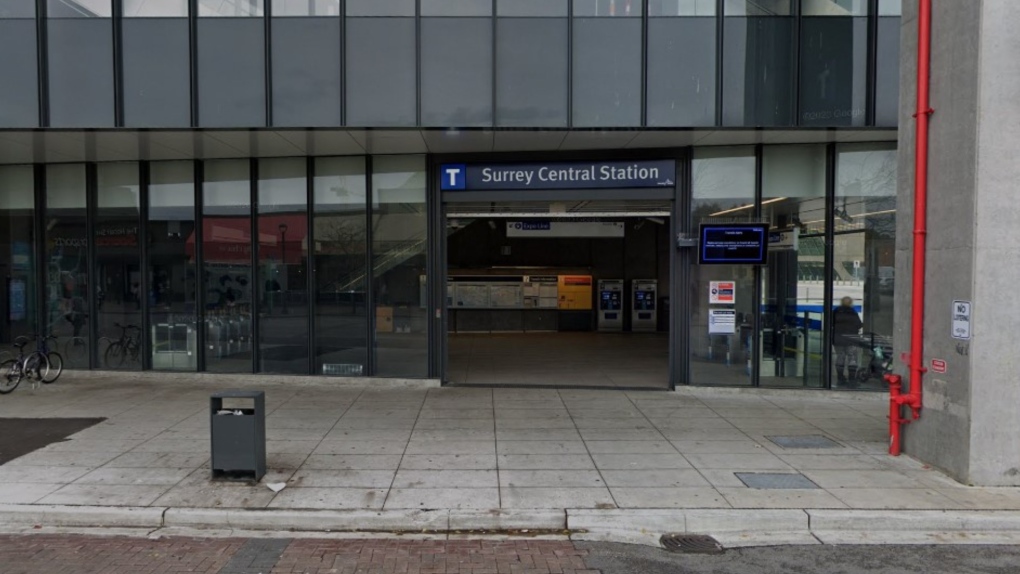 The entrance to the Surrey Central SkyTrain Station is seen in a Google Maps image captured in November 2020.

VANCOUVER -- A 44-year-old man has been charged in connection with a series of seemingly random assaults at SkyTrain stations in Surrey last month.

Metro Vancouver Transit Police said three people were body-checked without provocation over a period of nine days, including one man who was subsequently choked unconscious.

"Everyone has the right to feel safe while using transit. Violence of any kind will not be tolerated," Sgt. Clint Hampton said in a news release Wednesday.

"The suspect's alleged actions could have had dire consequences for the victims and were completely abhorrent."

The first incident happened at the Surrey Central SkyTrain Station on the evening of April 9, when a suspect allegedly attacked an attendant in what the victim described as a "hockey check." The attendant managed to stay on his feet, police said.

The second happened at the Scott Road SkyTrain Station on the afternoon of April 14. Authorities said the victim was standing at a Compass vending machine when someone body-checked him so hard he was thrown to the ground.

The last and most alarming attack happened at the Gateway SkyTrain Station on the evening of April 17. Police said a suspect shoulder-checked a man at random then tried to pick a fight with him, saying "hit me" while striking the victim's chest.

When the victim tried to run away, his attacker allegedly grabbed his backpack, then wrapped his arm around the man's neck until he lost consciousness. The suspect then fled the scene.

"In the April 17 incident, the level of violence used against a complete stranger for no apparent reason is of particular concern," Hampton said. "A traumatic event like this can have a lasting, negative psychological impact on any person."

Officers have since arrested a man with no fixed address. Benjamin James McBeath, who is said to be "well-known" to police, is charged with two counts of assault and one count of assault by choking.

McBeath is scheduled to appear in Surrey provincial court on Wednesday.