Should B.C. adopt a seal hunt? Scientists warn of consequences 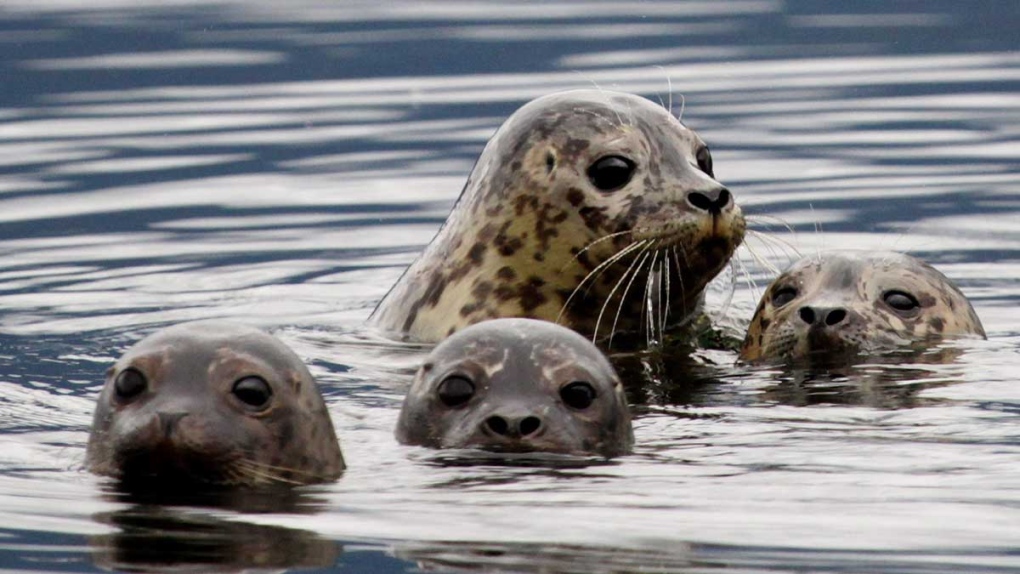 Rehabilitated harbour seals float in the waters of Howe Sound after being released back into the wild by the Vancouver Aquarium's Marine Mammal Rescue Centre in Porteau Cove, B.C., on Saturday Oct. 9, 2010. (Darryl Dyck / THE CANADIAN PRESS)

VANCOUVER - A British Columbia group wants to revive the seal and sea lion hunt on the west coast, provoking a debate about the controversial practice and prompting scientists to warn of consequences for the ecosystem.

Thomas Sewid of the Pacific Balance Pinniped Society says seal and sea lion populations have risen in recent decades and the animals have become dangerous pests to commercial fishermen while also contributing to the decline of salmon stocks.

Sewid, who lives in Campbell River and belongs to the Kwakwaka'wakw First Nation, said Indigenous rights to harvest pinnipeds for food, social and ceremonial reasons are not enough to control their numbers.

“Humans were put on earth according to our culture to help keep balance in the animal kingdom,” he said in an interview.

The society wants the Department of Fisheries and Oceans to first expand Indigenous harvesting rights to include the commercial sale of the flippered mammals, he said.

“The next step is let's get access for the residents of British Columbia, so they too can help harvest seals and sea lions for furs, oils, trophy animals, what have you, and protecting their commercial and sport fishing gear,” he said.

But Dr. Peter Ross of the Vancouver Aquarium says there's no data to suggest a cull would help salmon species.

“Personally and professionally, I don't think it would make an ounce of difference,” he said.

Individual animals may form bad habits, he said, giving the example of black bears that eat garbage. So it's true that some seals and sea lions snag adult salmon from fishermen's lines.

But he said while salmon only makes up a small part of their diets, 35 per cent of a harbour seal's diet is Pacific hake, which is a salmon predator.

“The food web is complicated,” he explained. “So take out the harbour seals and you're taking out a predator of a salmon predator.”

The salmon decline can't be pinned on pinnipeds, Ross said, because many factors have led to their decline, including warming ocean temperatures, habitat loss caused by human activity and overharvesting by fishermen.

Andrew Trites, who oversees the marine mammal research unit at the University of British Columbia, said perceptions about rising seal and sea lion populations are skewed.

And he warns that culling seals and sea lions would have consequences down the food chain, particularly for the transient killer whales that eat them.

“What I see the issue being here is, for some people it's not a question of sharing an ecosystem, it's an issue of controlling it,” Trites said.

He said the seal and sea lion populations were historically decimated, not balanced, by overharvesting after Europeans arrived in North America.

It's only in the past 40 years that they have sprung back to healthy levels along British Columbia's coast following their protection by the Fisheries Act in the 1970s, he said.

However, Trites said there may be a perception of the population's growth because they have spread out into new areas along the coast as they flee predator transient killer whales.

The sea lion population is growing but is about a third the size of the seals, he said.

“As far as we know, the numbers we're seeing now are consistent to what were there prior to Europeans coming to hunt them, so they seem to be back at historic levels.”

Although a study by the University of British Columbia found that seals were eating juvenile salmon at river mouths, Trites said it's important to remember only a tiny portion of those baby fish would have survived anyway.

On Tuesday, the Vancouver Aquarium issued a statement saying it was treating a seal that was shot in the face. “Jessica Seal” is the fifth animal injured by gunshot that the aquarium has helped in recent years.

Dr. Martin Haulena, head veterinarian at the aquarium, said in the statement he fears conflicts between people and seals could increase because of unfounded suggestions that seals and sea lions are damaging salmon stocks.

“The conflict on the water between humans and seals is not new - they want some of the same fish. I do worry people now feel more comfortable taking aim because they've been hearing seals are the bad guys, and they're not,” he said.

Fisheries and Oceans Canada says it has received a proposal from the society to commercially hunt pinnipeds but the application is in its early stages.

“The broader ecosystem is always a consideration and what impact something like this is going to have on it,” she added.