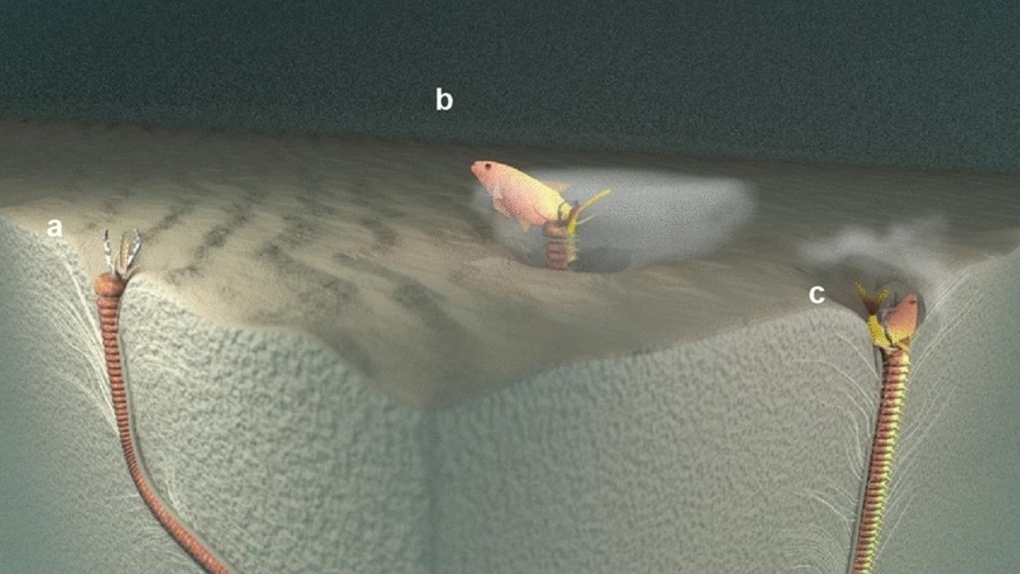 VANCOUVER -- Predatory sand worms up to two-metres long were striking at prey from beneath the ocean floor near Taiwan some 20 million years ago, according to new research from Simon Fraser University.

The findings, which were published this week in Scientific Reports, began with the discovery of a trace fossil of the creature's underwater burrow that was located along a rocky coastal area of the island nation.

"Compared to other trace fossils, which are usually only a few tens of centimetres long, this one was huge," said lead author Yu-Yen Pan in an SFU news release. "(It was) two-metres long and two-to-three centimetres in diameter."

Pan, a PhD student in the university's earth sciences program, described the find as a "monster burrow."

Its inhabitant is believed to have been similar to a modern Bobbit worm, a species purportedly named after the infamous John and Lorena Bobbitt case.

The sand worm would hide inside the L-shaped burrow, waiting for the right moment to burst out and clench an unfortunate passerby in its jaws. The predator would then pull the still-living prey down below to be consumed.

The SFU researchers said these giant sand worms have been around since the early Paleozoic – more than 400 million years ago – but their soft bodies leave little behind for modern-day scientists to study.

"Their bodies comprise mainly soft tissue, resulting in a very incomplete fossil record, and virtually nothing is known about their burrows and behaviour beneath the seafloor," reads an abstract of their findings.

But Pan and her team were able to examine 319 specimens in northeast Taiwan and construct a morphological model of the burrow, which they named pennichnus formosae.

SFU said the find appears to be the first trace fossil produced by a sub-surface ambush predator, "allowing researchers a rare opportunity to learn more about this ancient sand-striker's behaviour."