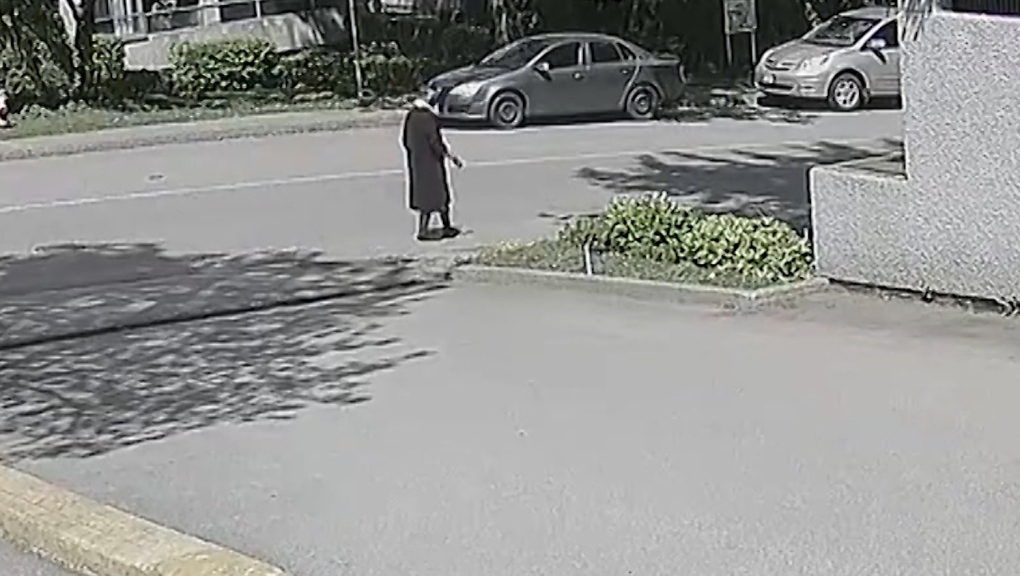 Burnaby RCMP say they're looking for a suspect in an attack on a senior woman. (Burnaby RCMP handout)

VANCOUVER -- Mounties in Burnaby are looking for a suspect after a senior woman was reportedly attacked and choked by a stranger.

According the RCMP, a 75-year-old woman was walking down Government Street not far from Keswick Park last Thursday afternoon when she was attacked.

"The victim was choked and was left with abrasions by the attacker," Mounties said in a statement released Wednesday.

"She was taken to hospital but has since been released."

Mounties say they still haven't located the suspect in the incident that happened shortly after 2:30 p.m. The suspect is described as white, in his 30s and about 150 pounds. Police say the man had short brown hair, and was wearing a black jacket that went below his knees and a black mask.

Police did release security video that shows a man matching that description walking in the area around the time of the attack. The video doesn't show the attack itself, but shows a person walking slowly along the street.

A long black jacket – that police say they think the suspect was wearing – was later found in the area while officers were conducting their investigation. Mounties believe the suspect fled the area a witness helped the victim and called 911.

"The Burnaby RCMP is hoping someone may recognize the suspect seen in the video as our investigators try to track down the person responsible for this," said Cpl. Michael Kalanj in a news release.

"At this time there is nothing to indicate what motivated this attack."

No other similar attacks have been reported in the area recently, police say.

Anyone with information is asked to called Burnaby RCMP at 604-646-9999. Tips can also be left anonymously with Crime Stoppers.

Do you recognize the suspect in this video?

He is accused of attacking a senior as she walked on Government Street near Keswick Park on May 20. He was wearing a long coat at the time of the attack.