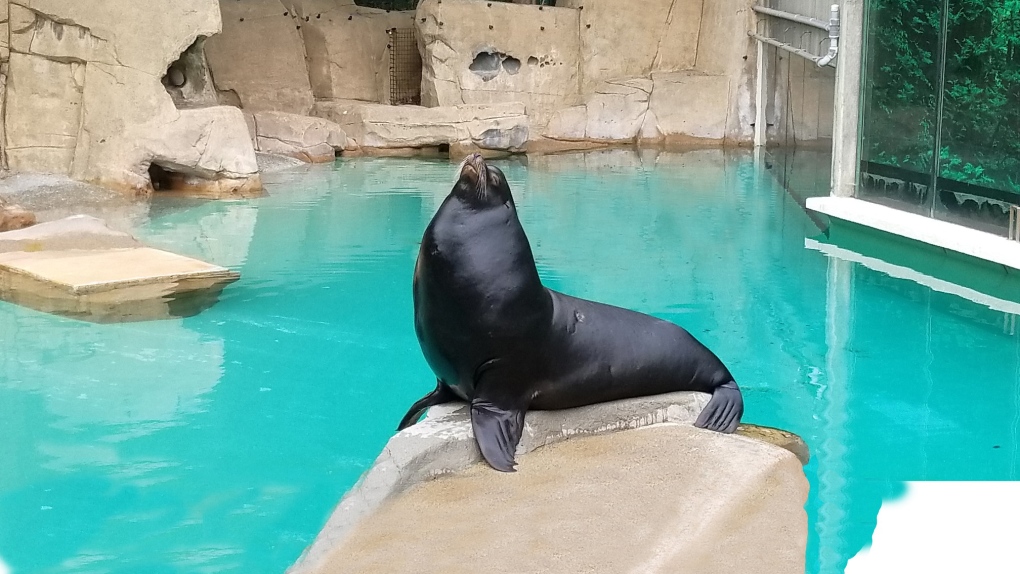 Senor Cinco is seen in this photo provided by the Vancouver Aquarium.

A blind California sea lion rescued from Vancouver's Spanish Banks last year has made a remarkable recovery and is settling into his new life at the local aquarium, staff say.

“We could tell immediately that his condition was critical,” Lindsaye Akhurst, manager of the Vancouver Aquarium's Rescue Centre, said in a statement. “An adult sea lion should not be easy to approach, but he was lethargic and not responsive to activity around him on the busy public beach.”

According to the aquarium, the animal had been shot in the face with a small-caliber gun, likely several weeks before he became stranded on the B.C. coast.

The injuries left Cinco blind in both eyes and with broken teeth. Unable to feed himself, the 10-year-old sea lion was severely emaciated by the time rescuers got to him.

Medical tests revealed he still had two bullets lodged in his head. Once veterinarians removed his broken teeth, he began eating again, gaining more than 140 kilograms over the next year and winning the hearts of those who cared for him in the process.

“We don’t play favourites; we care about all of the animals that come through here,” said Akhurst. “But Cinco really is a special animal; he’s a bit of a gentle giant. He can’t see us but he responds to the sound of our voices and takes his fish like such a gentleman.”

Despite his impressive recovery, Fisheries and Oceans Canada has deemed Cinco non-releasable because of his blindness.

He was moved to the Vancouver Aquarium's Sugar habitat, where staff say "he is beginning to get more comfortable and confident" by feeling his way around the new space.

“He is settling in just fine,” said Brian Sheehan, curator of marine mammals. “His first day was spent starting to feel his way around his new habitat, but in the weeks and months to come, Cinco will begin his training, learning behaviours that will help us take care of him, and provide exercise and enrichment."

Cinco is the first California sea lion to live at the Vancouver Aquarium. Male members of the species can be distinguished from the Steller sea lion by the blond, "buzzcut" crest on their heads and the distinct "barking" sound they make.

Visitors to the aquarium will be able to observe Cinco as he settles into his new digs.