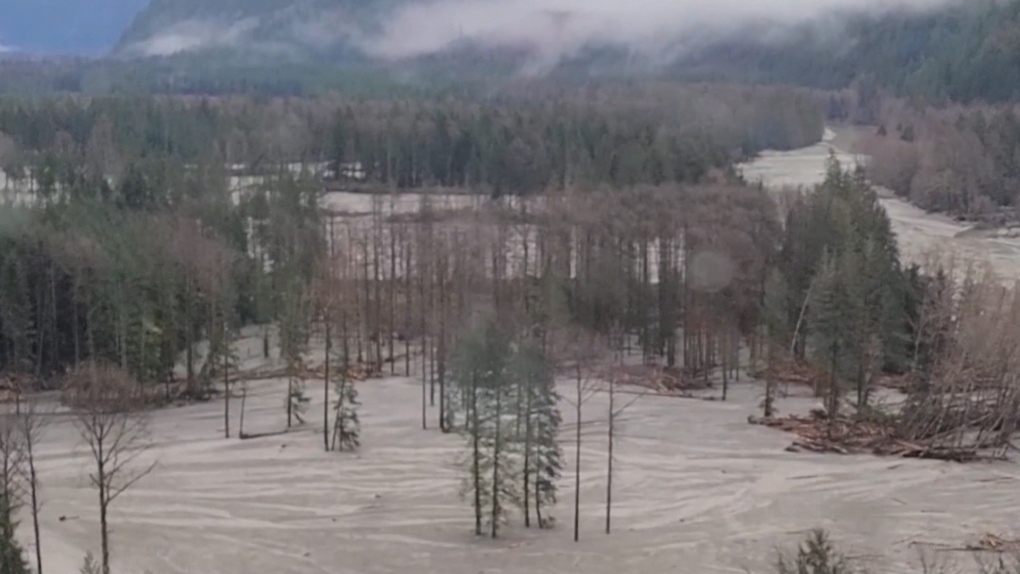 Mud, debris and trees all swept into Bute Inlet, B.C., after a massive landslide. (Submitted)

A pilot with 49 North Helicopters heard about the remote slide and flew over the area to survey the damage.

"Not sure what happened but most likely the glacier, just some ice came into the lake and created a wave maybe and then it was just too much water for the valley,” said pilot Bastian Fleury, who provided CTV News with a video of the widespread devastation.

Chief Darren Blaney of the Homalco First Nation has seen the video and says the slide has clearly impacted the coho and chum salmon spawning grounds.

"It looks so big. Just huge. The force of that water coming down that hill really did a lot of scouring as it came down and washed out all the eggs that were spawned this year,” he said.

The importance of salmon to the Homalco First Nation cannot be overstated and this natural disaster creates yet another problem for a food source already becoming scarce.

"We could always rely on our chum stocks. They were always reliable,” said Blaney. “Within the last few years they started going down. Homalco got 1,200 out of our 4,000 allocation of chum a few years back."

Those who have seen the slide firsthand suspect it may be one of the largest in the province in recent years.

“This literally looks like a bomb went off,” said Leigh Nelson of Quest Water Taxi. “We have everything from sawdust, to bark, to sticks, to pieces of trees. All parts and pieces are there, they’re just not in tree form.”

Blaney says he’ll be touring the area in a helicopter Wednesday and working with provincial and federal officials to assess the damage and potential long term fallout for the ecology of the area.