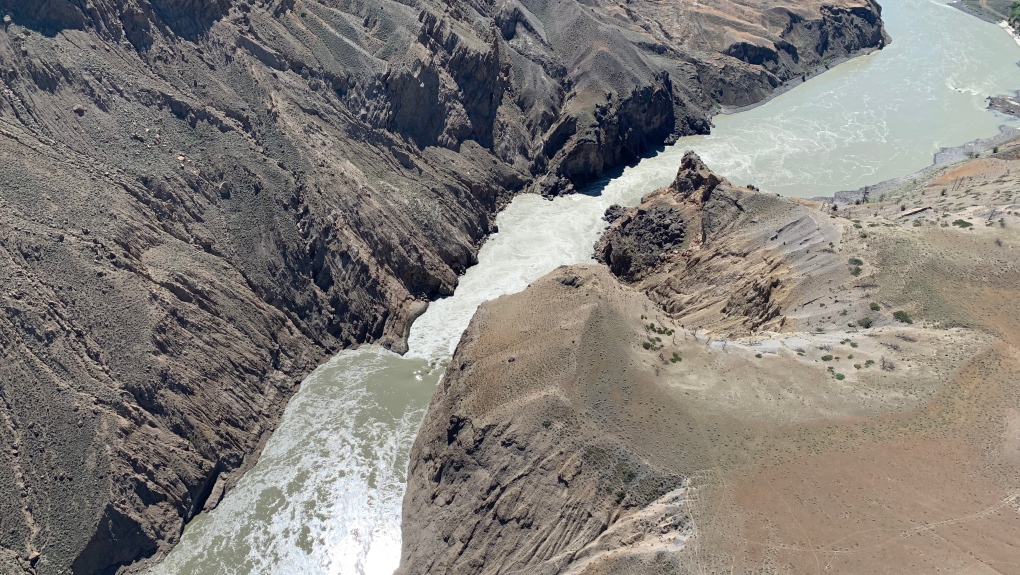 VANCOUVER -- Parts of a pneumatic fish pump dubbed the “salmon cannon” have arrived at the site of a massive landslide along British Columbia's Fraser River, where Fisheries and Oceans Canada expects some salmon to begin arriving soon.

Six 160-metre tubes of different sizes are being suspended along the canyon wall above the river, said Gwil Roberts, director of the department's landslide response team.

A fish ladder that's nearly complete would attract salmon, guiding them into a holding pond before they enter the fish pump and tube system that will take them up river from the slide, said Roberts.

The pump system is leased from a Seattle-based company and includes a scanner that measures the size of the salmon in order to send them into the appropriate tube.

Roberts said the largest tube is about 25 centimetres in diameter and the system is more gentle than the “salmon cannon” label suggests.

A deceleration mechanism would slow the salmon down and deposit them gently upstream after the fish have travelled about eight metres per second for 20 seconds, the department said in a statement.

The pump and other measures underway at the site, including a series of boulders arranged to create pools where salmon can rest, are designed to minimize the need to handle the fish, said Roberts.

“This reduces stress to the fish,” he said, adding that transporting fish by trucks equipped with large water tanks is a last resort this year.

Tens of thousands of salmon were transported by truck and helicopter after the slide was discovered late last June.

Roberts said spring water levels are still too high for salmon to navigate the series of boulders and pools that make up a “nature-like fishway.”

The site is being prepared and the fish pump will be installed shortly to aid the salmon until water levels drop, he said.

There have been no reports of salmon arriving yet, said Roberts, but Chinook and other early returning salmon are expected soon.

The landslide sent 75,000 cubic metres of boulders and debris into the Fraser River north of Lillooet, creating a five-metre waterfall and a major obstacle for salmon returning to their spawning grounds.

Roberts said mortality was “extremely high” last year because fish had been arriving at the base of the waterfall and trying to swim upstream for at least a month before the slide was discovered.

“They were battering themselves and getting stressed,” he said. “This year we have the plan in place to move the salmon to ensure they can get across the slide site and we are very hopeful we will have very, very low mortality.”

The fish have already travelled about 375 kilometres from the mouth of the Fraser River before arriving at the slide and some continue another 600 kilometres, said Roberts.

He said the ultimate goal is to establish a natural fish passage at the site.

“You're looking at the destruction of salmon stock if we don't do something here. If we don't help, if we do not facilitate or make fish passage happen, then you will see the disastrous effects to those stocks.”

Roberts said a hatchery program is also in place if need be, which means some salmon could be captured and their offspring reared before being reintroduced into the wild, depending on the arrival of different salmon species.

Fisheries and Oceans Canada has pointed to warming ocean waters, habitat degradation, disease and other threats as factors that are contributing to the decline of many wild Pacific salmon stocks and species.

A previous version based on information provided by Fisheries and Oceans Canada said the fish travelled at 20 metres per second.