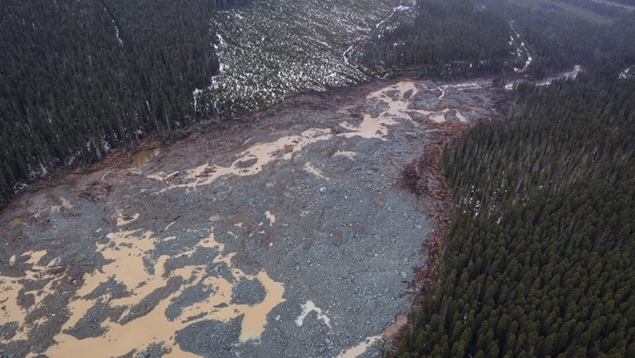 A rock slide shorn off part of Joffre Peak, just ahead of the long weekend. (Gary Barndt / CTV's Chopper 9)

A rock slide has shorn off a large chunk of Joffre Peak ahead of the long weekend.

Photos posted to social media show part of the mountainside have fallen away.

It's reportedly the second slide to hit the mountain this week.

Photos posted on May 12 show a first initial slide, followed by a second slide on May 16.

Hydrologist and geoscientist Drew Brayshaw, who has climbed extensively in the area, says it appears the first slide sent a flow of debris more than four kilometres down Cerise Creek, east of Joffre Lakes Provincial Park.

In an advisory, BC Parks said there was a "significant bedrock failure" on May 12.

"The resulting landslide has impacted the Cerise Creek valley basin to the northeast of Joffre Peak. The Joffre Lakes basin was not impacted," the advisory reads.

BC Parks says the provincial park as well as the campgrounds remain open.