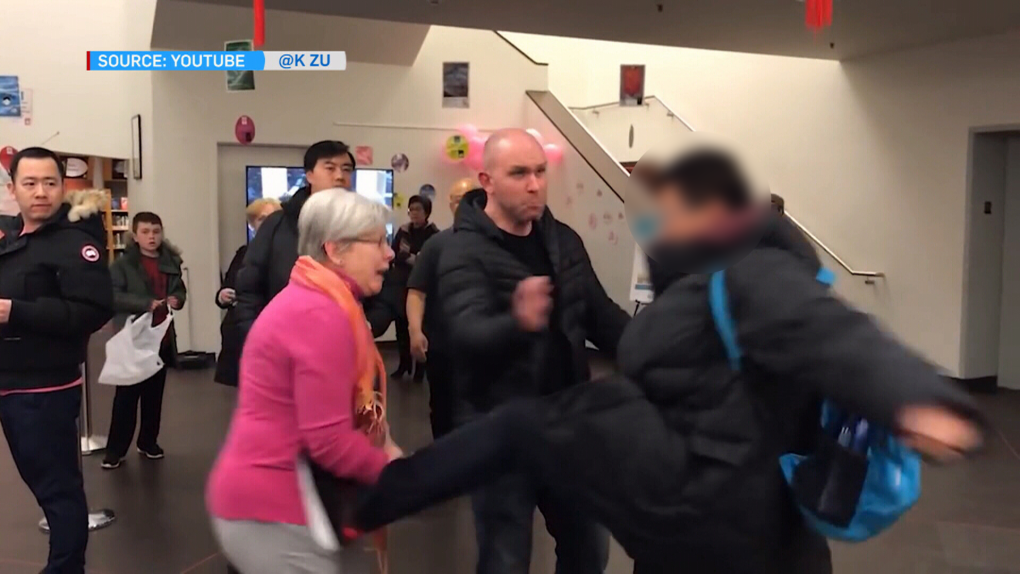 March 2 update: Mounties in Richmond say they have identified and located a man responsible for kicking an elderly employee at a local library Wednesday.

Mounties in Richmond are searching for a suspect after a woman in her 60s who works at a local library was assaulted during a community meeting on a plan to help the city's homeless.

According to the city's website, residents were gathered at the Richmond Public Library branch on Minoru Gate between 3:30 p.m. and 7:30 p.m. Wednesday to discuss a 40-unit temporary modular housing project proposed for the Brighouse area.

The woman, who collapses after the kick, is then helped to her feet by bystanders.

"We may be looking at assault charges," Hwang said, adding that the victim suffered only minor injuries as a result of the assault.

"We're known for being a very safe community," he said. "We do have a lot of community gathering and it's very rare that something like this occurs, so it is troubling when we hear about such an event."

The suspect is described as an Asian male in his early to mid-30s who is clean-shaven and wears glasses. He was wearing a puffy, black winter jacket, dark pants, dark converse-style sneakers and a blue backpack at the time of the alleged attack.

Mounties are asking anyone who might have been at the gathering to contact investigators if they have information about the incident at 604-278-1212.

Last month, the city announced it’s partnering with the province to build 40 temporary homes for those struggling to find stable housing.

Richmond is contributing the land at 7300 Elmridge Way for the proposed homes for up to five years.

The initiative is part of the province’s plan to build 600 temporary modular housing units across Metro Vancouver—a near-term solution to the homelessness crisis that has gripped parts of the region.

In Vancouver, there is already a modular housing project at 220 Terminal Ave., and a development permit has been approved for a lot at 650 West 57th Ave. The city is seeking a permit for 4410 Kaslo St.

These initiatives, however, have faced strong opposition from residents who say they're worried about safety in their neighbourhoods.

In January, three modular housing sites were also announced for the City of Surrey.