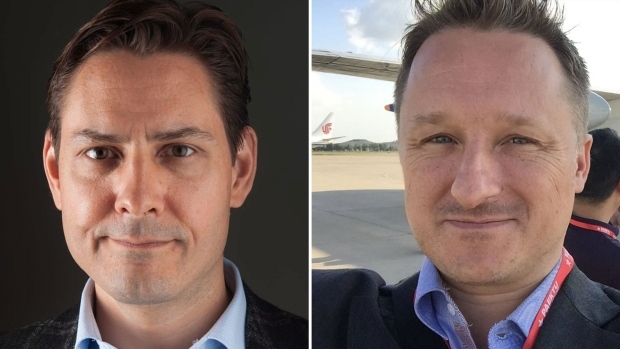 OTTAWA -- The two Canadians imprisoned in China could face retaliation because Wednesday's court ruling in the Meng Wanzhou case didn't go the way the People's Republic would have liked, experts are warning.

The Chinese embassy in Ottawa angrily denounced the decision by Justice Heather Holmes in the extradition case of the Huawei executive, who is wanted on fraud charges in the United States, as it once more called for her immediate release.

Michael Kovrig, an ex-diplomat working for the International Crisis Group, and Michael Spavor, an entrepreneur who did business in North Korea, have been in Chinese prisons with no access to lawyers or their families since they were arrested nine days after Meng's arrest by the RCMP in December 2018.

They are accused of violating China's national security interests, and they have been denied even the regular monthly visits by Canadian diplomats since January because of COVID-19 restrictions on Chinese prisons.

But some analysts say their treatment could get a lot worse, especially based on recent Chinese government statements leading up to the ruling.

“The PRC authorities' statement of consequences of 'continuous harm' to Canada if Ms. Meng is not returned to China forthwith suggests that there will be further retaliation,” said Charles Burton, a China expert with the Macdonald-Laurier Institute, who has served as a diplomat in Beijing.

“I am concerned that Kovrig and Spavor may be forced to make false confessions on Chinese TV followed by a sham secret trial and possible sentences of death, usually suspended for two years before commutation to life imprisonment.”

David Mulroney, a former Canadian ambassador to China between 2009 and 2012, said China is furious over the unresolved Meng case.

“Unfortunately, two innocent Canadians, Michael Spavor and Michael Kovrig, will bear the brunt of that anger. It is likely that the detentions will be extended until China has some clarity as to Ms. Meng's eventual fate. Unfortunately, that could take some time,” said Mulroney.

“China will also seek to lash out at Canada.”

Fen Hampson, a global security expert with the Norman Paterson School of International Affairs at Carleton University, said Canada should rethink whether it needs to intervene politically to end the case rather than let it play out in the courts for years.

“You've got two Canadians who are in jail under fairly perilous circumstance, given COVID-19, and broader considerations at play in terms of Canada's trade and investment relations with China,” said Hampson.

“Whatever happens, it will end up on the desk of the justice minister - he's the one who has to decide whether she gets extradited or not. In some ways, you're delaying the inevitable. The government is still going to have to make that decision.”

The roots of Canada's current problems with China predate the Meng-Kovrig-Spavor affairs, said Wendy Dobson, an author and China expert who is co-director of the Institute for International Business at the University of Toronto's Rotman School of Management.

The government's current preoccupation with “diversifying” its trade relations with other Asian countries reflects a long-standing inability to do just that, she said.

“We've been saying this to ourselves for years, but we haven't gotten very far,” Dobson said.

“We have not done a very good job of educating Canadians and deepening their understanding of who this partner is, where this partner comes from, and how to contribute in a way that is useful to both of us in the long term.”

This report by The Canadian Press was first published May 28, 2020.