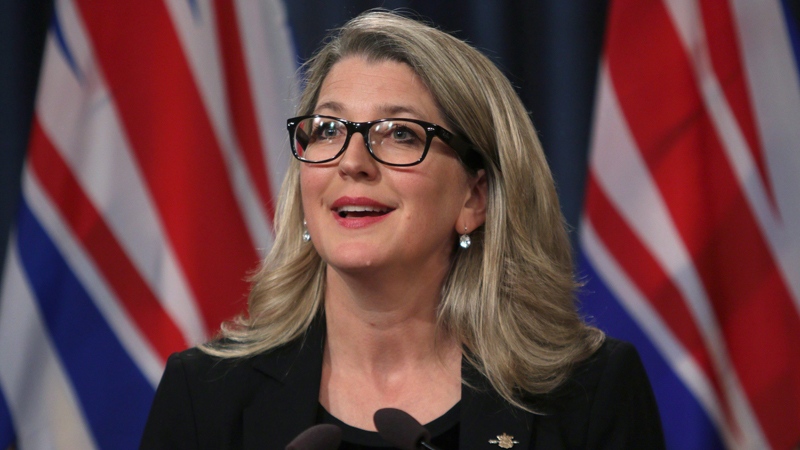 Minister of Agriculture Lana Popham speaks during a press conference in the press gallery at the Legislature in Victoria, B.C., on Wednesday June 20, 2018. THE CANADIAN PRESS/Chad Hipolito

VICTORIA - An independent report on agricultural revitalization in British Columbia is calling for a task force to address the "imbalance" between oil and gas development and agriculture in the province's northeast.

The Agriculture Ministry released the final report today that makes 32 recommendations related to the province's Agricultural Land Commission and Reserve.

It calls for the proposed task force to review how to balance the surface rights of farmers and ranchers with subsurface rights of the extractors, and to deliver a strategy to address "the significant resource extraction issues" affecting farmland in the Peace Region.

In a letter introducing the report, committee chair and former Independent MLA Vicki Huntington calls for a government-wide policy shift that identifies B.C.'s agricultural land and industry as equivalent to other natural resources.

Huntington says the oil and gas industry has had a significant and growing impact in the northeast and the development of the energy sector has exceeded the capacity of the current regulatory environment to protect farmland.

The report recommends the Energy and Agriculture ministries, the Agricultural Land Commission and the B.C. Oil and Gas Commission work together to develop a healthier relationship that respects not only the energy industry, but also the "increasingly besieged agriculture industry."

"Surface and subsurface infrastructure expansion is progressing exponentially and activities that were once temporary have become permanent industrial sites built on farmland and next to farm communities," the letter says.

"The cumulative impact is making it increasingly difficult for many farmers and ranchers to effectively use their land."

The proposed task force should review how farmers and ranchers might be given authority to influence negotiations on the location of oil and gas facilities and infrastructure, and complete an impact assessment of all oil and gas activity within the ALR, the report says.

Other recommendations include consideration of directing a portion of royalties from oil and gas development in the ALR to a regional agricultural development fund and creating an agreement between the ALC and Oil and Gas Commission for sharing impact assessments and other information.

Agriculture Minister Lana Popham says in a statement the government has already acted on 13 recommendations released in an interim report, including passing laws aimed at keeping farmland affordable and cracking down on illegal dumping.

"I want to thank the committee for its dedication and the thoughtful recommendations made in this report," said the statement says.

"Our government is committed to helping farmers farm. We asked the committee members to provide advice on how the ALR and ALC can provide the best support for farmers, ranchers and producers to ensure B.C.'s agricultural sector continues to thrive, and they delivered."

The committee commissioned to complete the report consists of eight British Columbians with diverse agricultural backgrounds and experience.

More than 2,300 British Columbians responded to the committee's online discussion paper and survey, and the committee also received over 270 written submissions.

The committee held engagement sessions with local governments and agricultural stakeholders in nine communities throughout the province and met with the Union of B.C. Municipalities and the ALC.