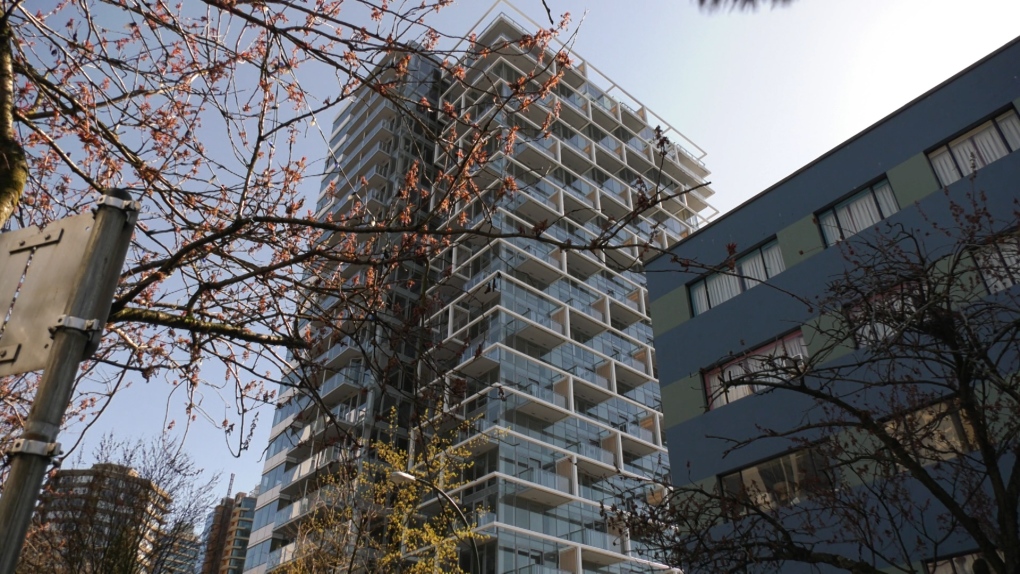 Westbank Corp high-rise in Vancouver's West End. There will be no rent reduction for tenant impacted by COVID-19.

UPDATE: After this story aired, Westbank provided clarification to CTV on the company’s position.

A spokesperson said the tenant had not been asked to use her car as collateral, saying: “An email from the management company included an example of an asset provided by our legal team that would be acceptable as security for future rent payment.”

The spokesperson said breaking the lease had not been a part of the company’s communications with McLean, and that she had "requested a month's rent be waived or deeply discounted."

And the spokesperson added management is continuing to work with the tenant on the issue.

“We will work with the tenant to find a longer-term solution for the coming months, as more information on BC-Temporary Rental Supplement (BC-TRS) Program becomes available.”

The COVID-19 crisis is putting a lot of pressure on renters and landlords. Renters who have lost their income can’t afford to pay their rent and landlords who have to make loan payments are struggling as well.

However, according to the government, we all have to work together to get through this.

Vancouver renter Jennifer McLean was hoping for a sympathetic ear from Westbank Corp. when her dog training business took a dive. She says she has lost 90 per cent of her income since the pandemic hit.

In February, she signed a one-year lease for a 550 square foot, one bedroom apartment in a new Westbank high-rise in Vancouver’s West End for $2,325 a month. At that time, she says, she could afford it. Now she can’t, and says she doesn’t qualify for any of the government assistance programs.

“I fall through the cracks.”

McLean is still making a bit of income from online dog training, so she says she doesn’t qualify for the $2,000 a month Canada Emergency Response Benefit. She says her business doesn’t generate enough revenue to qualify for the government-backed loans for small businesses and she’s not low income, so she won’t qualify for B.C.’s $500 a month rent subsidy that will be paid directly to landlords.

“This is a very unique time. Everybody’s hurting right now. We all need to work together, we need to help one another,” McLean says.

So she reached out to Westbank Corp. to try see if she could renegotiate her rent.

In an email response to her, Westbank stated: “We as a business cannot simply let tenants not pay rent or reduce rental amounts as we have obligations to banks/lenders, taxes, maintenance etc. to keep the building operational.”

However, the company offered to work with her to defer her rent as long as she provided assurances she could pay it back- statements for bank account balances, RRSP statements- even suggesting she use a vehicle as collateral.

The Tenant Resource and Advisory Centre is encouraging landlords to work with tenants during this crisis.

“Landlords have to realize that they cannot expect to be the only people in this crisis that don’t see any shortfall in income,” says Robert Patterson, a legal advocate with TRAC.

CTV News reached out to Westbank for comment and received an email stating that they are working with tenants whose incomes have been affected by offering rent deferrals. The company did not address our questions about renegotiating McLean’s rent.

She’s shocked at their response since she says she moved into the new building after renting from another Westbank property for five years. She says she’s always paid on time and left her previous apartment in immaculate condition.

“I would place a lot of value in a long-term tenant,” she adds, “I said that to them. ‘If you guys renegotiate the terms of my lease then I have a hope of staying here for many more years to come. But if you’re not willing to work with me, I’m going to lose everything, I’m going to have to move, you’re going to be without a tenant.’”

Patterson says now is the time for the government to address the situation for renters in McLean’s situation.

“There needs to be further protections for tenants who can’t work that out with their landlords, or landlords who won’t accept anything but the full rent.”

Prime Minister Trudeau has promised changes are coming to the Canada Emergency Response Benefit that could help people like McLean- those who make a bit of income but less than they would through the CERB.

McLean is now considering whether or not to break her lease before it breaks her.

“This pandemic could eventually break me,” she says.

'No likely end in sight': B.C. extends state of emergency; will be longest in province's history

Some B.C. teachers scared of returning to work on Monday

Canucks considering holding training camp in the U.S. due to Canadian quarantine rules

Canucks considering holding training camp in the U.S. due to Canadian quarantine rules

Harbour Air to resume flights out of Vancouver International Airport