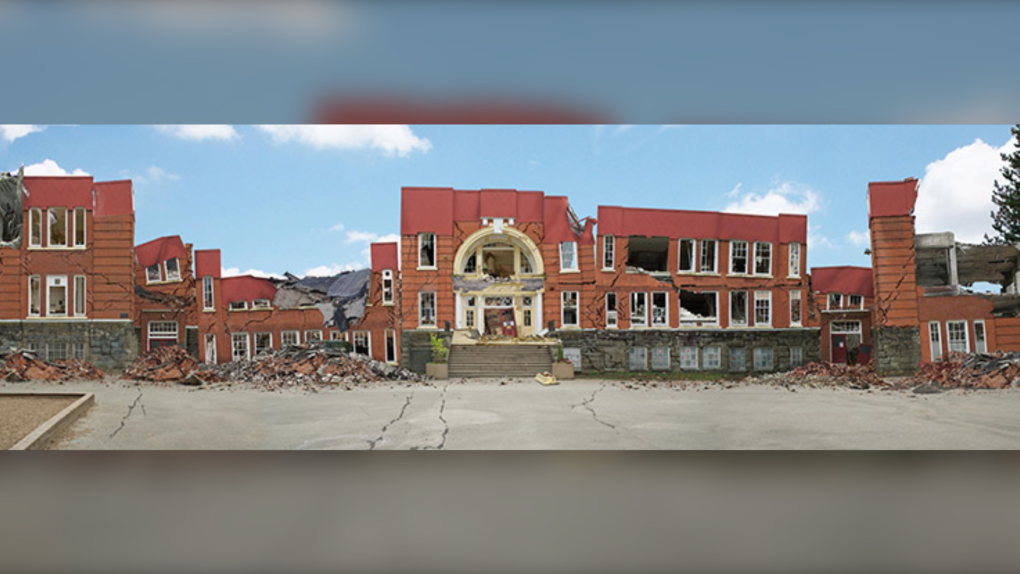 VANCOUVER -- A rendering of what a Vancouver elementary school might look like after a catastrophic earthquake could be nightmare-fuel for young students, according to a warning from administrators.

The striking image was commissioned by researchers at the University of British Columbia to study whether a dramatic visual would motivate more people to push for seismic upgrading at schools.

Their findings suggest the answer is yes.

The image depicts Lord Tennyson Elementary after a hypothetical earthquake, complete with cracked walls, a collapsed roof and broken windows. And while the researchers never name Tennyson in their study, the school's principal was not pleased to see the image publicized.

In a letter sent out to parents on Monday, principal Doug Roch said the school district never gave permission to use the image, and had actually asked the UBC team not to release it to avoid causing distress to any young Tennyson students.

Roch said it's possible children will feel anxious or upset after seeing their school in tatters, but that the school is prepared to help out necessary.

"I have met with our school staff to inform them of this study and associated images and we have discussed approaches on how to support students that may have viewed the images and find them upsetting," Roch wrote.

"If your child is experiencing difficulties at school due to the image, please encourage them to speak with their teacher for additional support."

The UBC researchers split study participants into two groups, exposing one group to statistics and the other to the image of Tennyson's destruction, then asked them whether they would sign a petition calling for the government to fast-track seismic upgrades.

They found people who saw the visuals were more likely to sign, by 11 percentage points.

Tennyson is already listed among the 15 B.C. schools currently undergoing construction for seismic upgrades. The $24.5 million project is estimated to be completed by spring 2020.