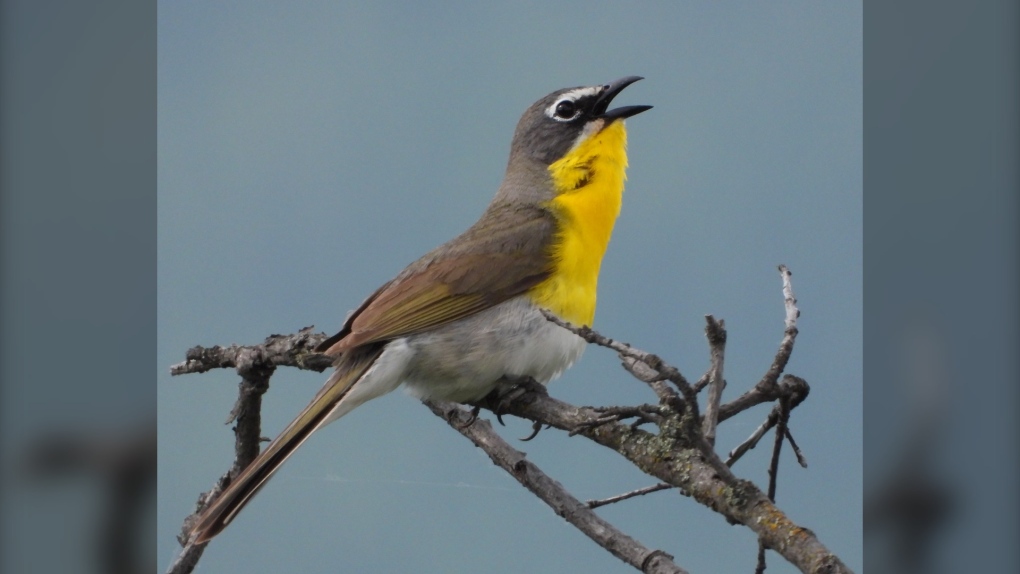 An adult male yellow-breasted chat is shown in this undated photograph on lands protected in collaboration between the En'owkin Centre and Penticton Indian Band with support through ECCC. The rescue from near extinction for a little yellow bird hinges on the wild rose in British Columbia's Okanagan Valley, a researcher says. THE CANADIAN PRESS/HO, A. Michael Bezener/ En'owkin Centre 2020

VANCOUVER -- A little yellow bird's rescue from the brink of extinction in British Columbia hinges on an oft-overlooked wild flower in the province's Okanagan region, according to one Canadian government researcher.

The importance of local wild roses emerged over a nearly 20-year experiment concentrating on the yellow-breasted chat, a tiny bird whose characteristics and precarious status have preoccupied scientists for decades.

At the beginning of the 21st century, the population at one breeding site on the grounds of the Okanagan Valley's En'owkin Centre stood at just one pair.

Today it's grown to roughly 22 pairs, a phenomenon Environment and Climate Change Canada researcher Christine Bishop largely attributes to the rejuvenation of wild roses in the area.

Bishop said human appetite for shoreline development, combined with livestock grazing, led to the depletion of the prickly wild rose bushes she described as providing the birds' ideal nesting conditions.

“They nest in forests along shorelines. And that's one of the key reasons why population declined,” she said. “Everybody wants to develop or live near waterfront. ... It's definitely a habitat that's under threat continually.”

Environment Canada teamed up with the En'owkin Centre - an Indigenous post-secondary institution - and the Nature Trust of B.C. to try and revitalize chat populations in the southern Okanagan Valley.

They fenced off about 70 kilometres along a stream, resulting in 455 protected hectares.

“This is a success story,” she said.

Bishop said the birds' preferred habitat in B.C. is wild rose bushes along shorelines with willow and cottonwood forests.

Sometimes they nest in habitats with poison ivy as long as it is intermingled in a thicket of wild rose, she added, noting humans don't often recognize such environments for the vital wildlife habitats they are.

“A lot of times people see these sites with a young willow, cottonwood, and a thicket of rose and other shrubs and they just don't think of it as a forest because they don't see it as big huge ponderosa pines and so on,” she said. “And they don't understand that this type of thicket ... is not only used by chats, but many other birds as well as wildlife as cover and food sources.”

Bishop said chats have provided no end of scientific puzzles over the years, a fact even reflected in the species name.

Chats produce about 40 distinctive sounds, including imitations of other bird calls and sounds Bishop likens to car horns, but can't be classified as songbirds because they don't sing.

She said their vibrant yellow hue prompted researchers to categorize them as warblers for decades, but that classification was undercut by their roughly 25-gram weight, more than twice the size of an average bird of that type.

“In 2017, they actually created its own family. And it's the only species in that family, because it cannot be classified,” she said.

Chats also boast ultraviolet tints in their plumage, which are invisible to the human eye but can help male birds attract mates.

The males are also known to put on a distinctive display when allowed to enjoy their preferred shoreline forest habitats, she said.

“They dangle their feet and then they make this sort of honking sound,” Bishop said with a laugh.

“And they're flapping slowly ... dangling their feet and the females down below are watching this and judging his performance.”

Researchers are also concerned about the effects of climate change on the chat's habitat.

The watercourses will change into grasslands if it gets too dry in the Okanagan, making it unsuitable for these birds, Bishop said.

They might move to higher elevations if it gets too hot in the valley but that might not be the right habitat for them, she noted.

“So even though we see it as a great success story in terms of expansion of the population so far, the next 20 years will tell us whether or not the population will be able to survive.”

This report by The Canadian Press was first published May 9, 2021.