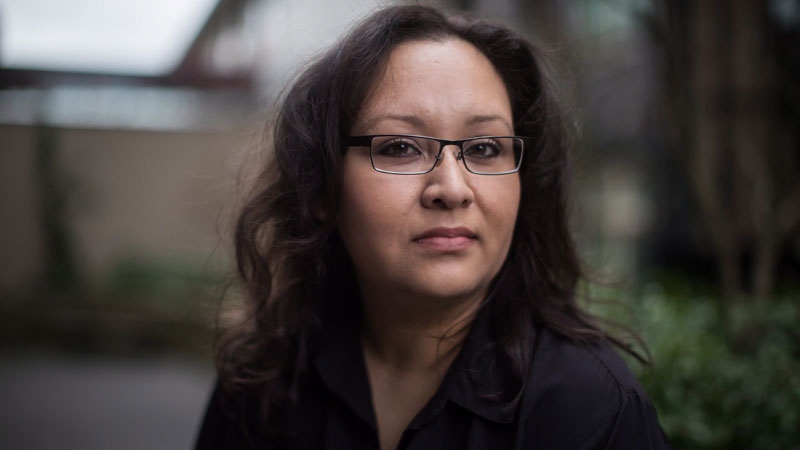 Tamara Parrales, who paid for an MRI at a private clinic, sits for a photograph at her home in Burnaby, B.C., on Saturday April 7, 2018. Excruciating pain had Tamara Parrales heading to the emergency department multiple times for nearly a year, and when a specialist brought up the possibility of ovarian cancer, she wasn't prepared to wait several months for an MRI in the public system. (THE CANADIAN PRESS/Darryl Dyck)

VANCOUVER - Excruciating pain had Tamara Parrales heading to the emergency department multiple times for nearly a year, and when a specialist brought up the possibility of ovarian cancer, she wasn't prepared to wait several months for an MRI in the public system.

Parrales, 36, made the decision to pay $1,100 to have the diagnostic test in a private clinic last fall and finally had surgery in March.

“If they say you might have cancer and then you have to wait four to six months to find out if you do, that should be urgent enough that they should get you in as soon as possible,” she said, adding the MRI showed she had endometriosis.

“It was almost a year before I had surgery and the reason for that is the surgeon has only one day a month of operating time,” Parrales said.

Starting in October, British Columbia doctors who charge patients for medically necessary procedures will face initial fines of $10,000 as the province enforces a law that hadn't been fully enacted for 15 years.

The stance against doctors illegally billing patients for private health care already covered by the public system coincides with the resumption of a B.C. Supreme Court battle by a surgeon who argues for a patients' constitutional right to speedier treatment.

The case launched by Dr. Brian Day is set to resume on Monday, and he said he may consider applying for an injunction against the law on private health announced last week by Health Minister Adrian Dix.

Day said his Cambie Surgery Centre, along with the province's 56 private surgical facilities and 17 others that provide MRIs, helps keep waiting lists down in the public system.

He said private clinics may be forced to close when the law goes into effect, allowing the province to investigate so-called extra billing practices and penalize physicians who don't reimburse patients like Parrales.

“The government is in court denying that wait lists are a problem and denying there's any harm from wait lists,” Dix said. “If 60- to 70,000 patients a year who currently go the private clinics are transferred into the public system, how does that help the system?” he said, quoting statistics from the B.C. College of Physicians and Surgeons.

Private clinics are not illegal, though billing for medically necessary care is a violation of the Canada Health Act.

Health authorities regularly contract out to private facilities for eye surgeries and other procedures that are paid for by public money, a practice that Health Minister Adrian Dix said will continue.

Dr. Trina Larsen Soles, president of Doctors of BC, said the medical association for the province's physicians supports patients having access to care regardless of their ability to pay.

“I understand the imperative of physicians who are struggling with not being able to provide the care that they want to because of limited operating-room capacity,” she said, adding she's hoping the government will deliver on recent commitments to increase the number of hip and knee replacements through measures including more efficient use of operating rooms.

“If indeed the government wants to address the waiting lists they're going to have to utilize every bit of capacity they can, both public and private. So we are encouraged by the fact that they are going to wait until October and they're open to negotiating with the owners and operators with these private facilities to look at what the transition might look like and how they can use them going forward to provide access to patients,” she said.

“If they cause the private facilities to go under without any backup plan then they've done a disservice to the patients.”

Christine Sorensen, acting president of the B.C. Nurses Union, said nurses, with backing from the Council of Canadians, the Canadian Health Coalition and the B.C. Heath Coalition, will hold a rally before Day's trial resumes on Monday.