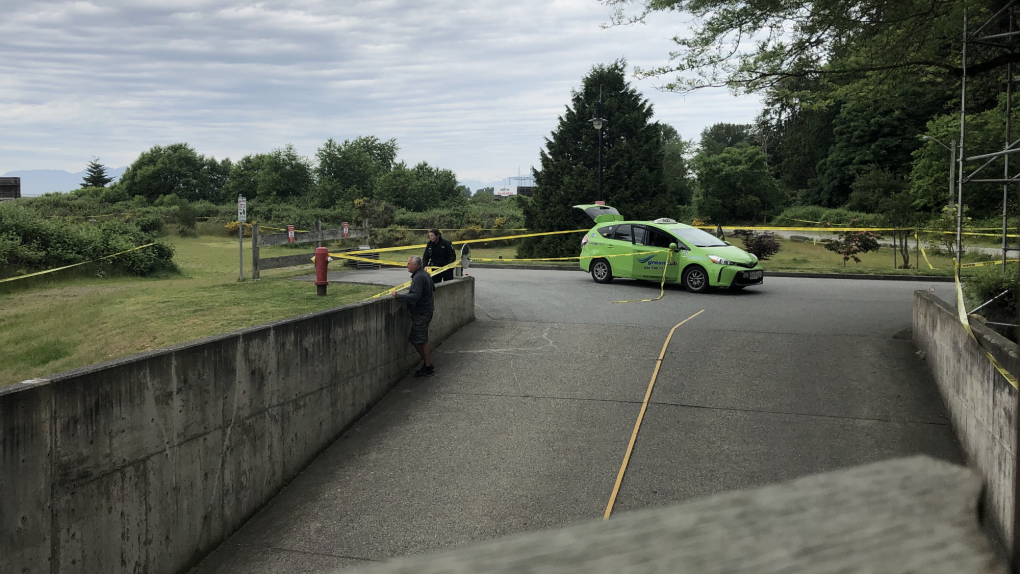 A photo taken by a resident of Tsatsu Shores Drive near the Tsawwassen ferry terminal shows a taxi cab from Delta Surrey Green Cab behind police tape.

VANCOUVER -- B.C.'s police watchdog agency is investigating an incident that ended in a man's death in Tsawwassen Friday night.

Delta police officers were called to the ferry terminal around 11:30 p.m. for reports of a taxi being stolen, according to a news release from the Delta Police Department. Two people were trying to hire the taxi at the time it was stolen, but were not inside the vehicle for the incident that ensued, police said.

Officers encountered a vehicle they believed to be the stolen taxi on the causeway, police said. The driver got out and "engaged with police," who called additional officers to the scene, according to Delta PD.

After "an interaction between officers and the individual," during which the driver allegedly produced weapons, the driver ended up dead.

Delta police did not elaborate on the circumstances that led to the man's death, but a news release from the Independent Investigations Office, which looks into incidents involving police officers that result in death or serious harm, indicates officers arrested the man before he died.

"During the course of his arrest, the man suffered serious injuries," the IIO said.

He was taken to hospital, where he was later pronounced dead, according to the IIO.

A photo taken by a resident of Tsatsu Shores Drive near the Tsawwassen ferry terminal shows a taxi cab from Delta Surrey Green Cab behind police tape. The photo was taken Saturday morning.

Anyone who saw, heard or recorded the incident is asked to contact the IIO witness line at 855-446-8477.

The BC Coroners Service is also investigating to determine how, where, when and by what means he came to his death, according to the IIO.

The IIO is an independent civilian agency that investigates all police officer-related incidents in B.C. that result in serious harm or death, whether or not there is any allegation of wrongdoing.