Authorities on both sides of the B.C. border launched a massive manhunt Tuesday morning after two suspects exchanged gunfire with Washington State border agents near the Sumas crossing.

A spokesperson with the U.S. Border Patrol says agents encountered the two men, both wearing camouflaged clothing and backpacks, around 9:10 a.m. in the Columbia Valley area, east of the town of Sumas.

Eric Dorais said one suspect fired at an agent and fled into the woods. The other was apprehended and is in custody.

Abbotsford Police were called in to assist the search after it was established that the suspect may have fled to the Canadian side of the border.

Roadblocks were set up along Marion and Vie roads following the incident. 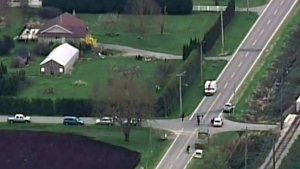 Police search for suspect after gunfire near B.C. border.