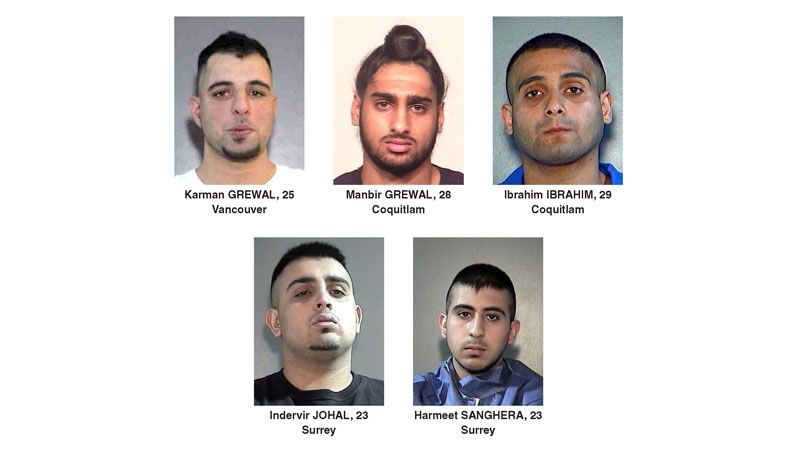 Surrey RCMP identified these five men as the intended victims in a recent spate of shootings. Police say they are not cooperating with the investigation, and are worried they might be the targets of continued violence. (Surrey RCMP)

Surrey RCMP revealed the identities of five intended victims in a recent spate of shootings Monday, and cautioned the targets’ friends and family that spending time with them could prove dangerous.

Karman Grewal of Vancouver, Manbir Grewal of Coquitlam, Ibrahim Ibrahim of Coquitlam, Indervir Johal of Surrey and Harmeet Sanghera of Surrey were all shot at in six shooting incidents July. Police say none of the men are cooperating with ongoing investigations.

“Although their lives are in danger, they are refusing to provide details to the police,” Cmdr. Dwayne McDonald said at a press conference Monday.

McDonald believes the five men know the people who were shooting at them, but they refuse to provide statements or identify suspects.

Police say these men are a risk to public safety because they will likely be the targets of more violence.

“[We] encourage the public to be cautious of any interaction with these men,” McDonald said. “There are family members, there are associates, there are friends… who may not fully appreciate the risk that they are in.”

Although McDonald couldn’t reveal too much about the investigation, he said the victims and the perpetrators of the shootings likely know each other because of the drug trade. He said the altercations may be over a turf dispute.

“Many people are lured into [the drug trade] because of easy money,” McDonald said. “In the period where they’re seduced by that myth, violence often erupts.”

Police have learned that the perpetrators in the July shootings would often lie in wait for their victims, idling in stolen cars. They would often light those cars on fire and abandon them after the shootings.

“If you see unknown vehicles in your area, occupied or suspicious, idling for long periods of time please contact us,” McDonald said.

Anyone with information about any of the six shooting incidents or the people involved is asked to call the Surrey RCMP at 604-599-0502 or Crime Stoppers at 1-800-222-TIPS.