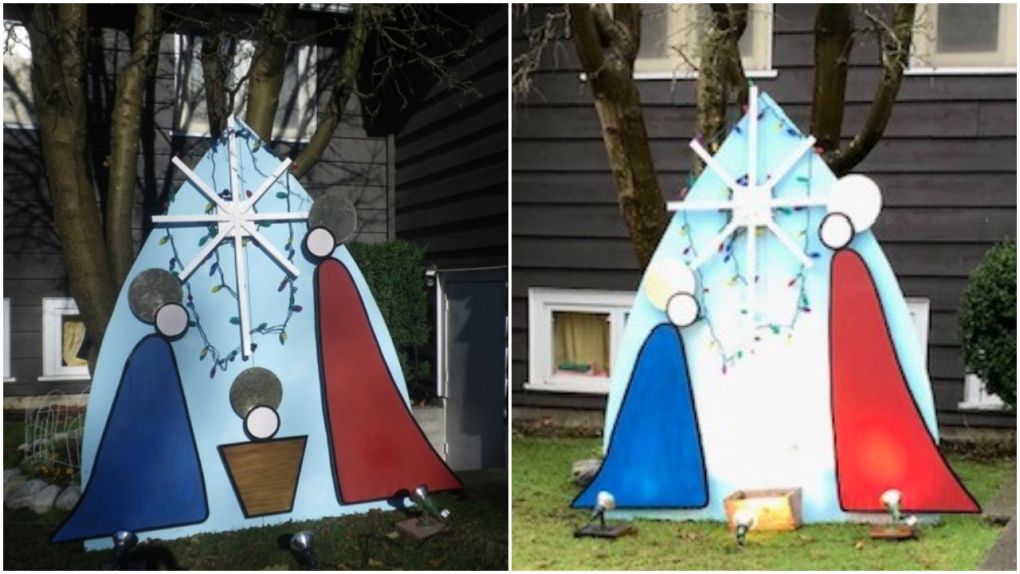 A nativity scene is pictured outside a church in Burnaby, B.C., before and after the theft of the Jesus painting.

The wooden, painted cut-out is part of a nativity display that stands on the lawn of St. Stephen the Martyr, a church in Burnaby.

A representative of the Anglican church, located on Cameron Street, told CTV News in an email, "He was last seen at least on Tuesday, Dec. 22."

Jesus's absence was noted at 6:30 a.m. on Sunday. The theft was reported to the RCMP on Monday.

"The simply designed nativity is made from heavy plywood and consists of four pieces: a blue background, Mary, Joseph and the baby Jesus," Colleen Butterley wrote in an email.

Altogether, it's about a metre high, and half a metre wide.

She told CTV it had been inherited from another church that closed many years ago.

The display has been kept in storage for a few years because it was "badly in need of a paint job," she said.

This year, however, a group of what Butterley called "enthusiastic parishioners" gave the piece an upgrade, and it was put on display the first week of Advent.

Parishioners are currently not permitted to attend services in person in B.C. due to COVID-19, but she said the display still brought some joy to those in the area.

"If there was ever a year to bring hope to the community, it was this year. We received many happy comments from friends and neighbours about how nice it was to see the display up," Butterley said.

But its central figure has since gone missing, and while there are security cameras set up on the property, the display was at an angle that was not visible.

Those at St. Stephen said they're hopeful someone will return the missing Jesus, so he can be "reconnected" with his family.