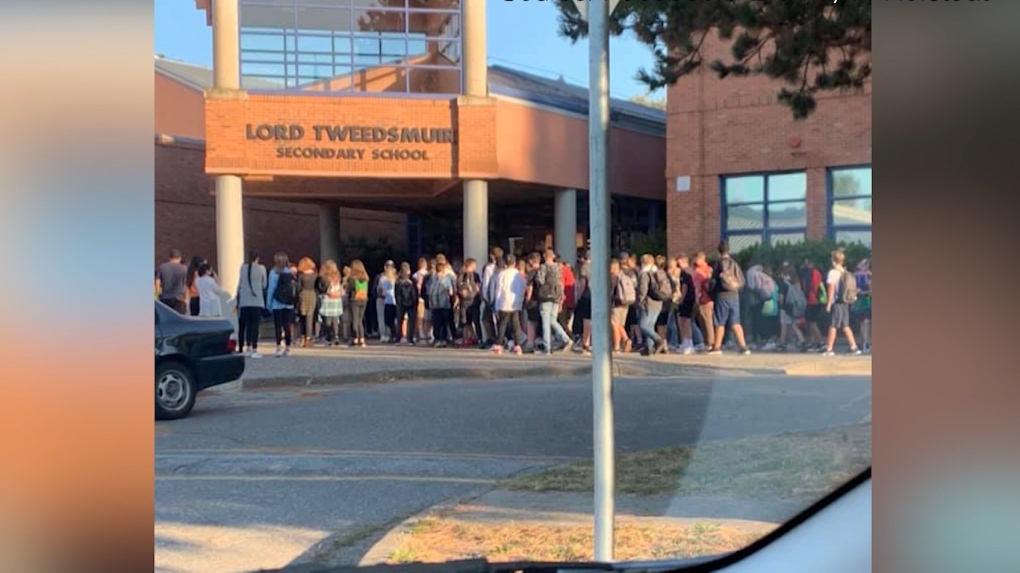 Some Surrey parents are concerned after crowds of students were spotted outside a high school during the first week back to class. It's unclear if the students were in the same learning group. (Bronwynn Hofstedt/Facebook)

VANCOUVER -- Some parents are raising concerns after crowds of students were spotted outside of Lord Tweedsmuir Secondary School in Cloverdale on the first day back to classes.

Photos taken by parents and posted on social media show dozens of Grade 8 students, standing close together outside the front entrance, despite physical distancing rules.

The school has been sent several emails to parents over the last few weeks outlining health and safety protocol for back to school.

Students were told to use the exterior doors closest to their classrooms, but many of the Grade 8 students were unfamiliar with the school’s layout and were confused about where to go.

According to the Surrey School District, the image was taken while students arrived for their health and safety orientation. The district says safety protocols were in place and masks and sanitizers were handed out at the entrance. Students were also reminded to keep their distance from others.

"We will continue to ensure that all of our students understand the importance of physical distancing, and their responsibility in following critical infection control practices," Ritinder Matthew, manager of communications with the school district told CTV News in an emailed statement.

"We know that these are new behaviours for our students, and we’ll continue working with them and their families to learn these new protocols, which include maintaining physical distance, regular hand washing and wearing a mask when in common areas."

Matthew says logistics were also adjusted before the afternoon cohort arrived to enforce distancing and direct student traffic to the appropriate entrances.

B.C.'s education ministry told CTV News Vancouver in an email that the purpose of the two orientation days before classes officially start is to familiarize students with public health guidelines in schools.

"While we understand the first day of orientation was a new experience for students, our expectation is that districts ensure student and staff safety is maintained at all times," the statement said.

"All schools have strict health and safety protocols in place, including maintaining physical distance when students are outside their learning groups."

It was unclear if all the students in the photos were in the same learning group. According to the education ministry's guidelines, students don't need to physically distance if they're in a learning group together. They should, however, reduce physical contact as much as possible.

Outside of a learning group, students and staff must keep a physical distance, the ministry says.

Lord Tweedsmuir Secondary has more than 2,100 students according to the school’s website.

It, like many schools in Surrey, was struggling with overcrowding issues prior to the pandemic, with more than a dozen portables.

Surrey residents say they're concerned about the impact a potential outbreak at the school could have on the community.

Some parents have written to the school’s principal to complain, saying their kids were not given enough direction.

“Our staff are continuing to reinforce all the health and safety measures and expectations for all students while in their orientation sessions this week,” wrote Principal Robin Smalley in an email to one parent.

“We do also have to rely on our students to heed the messages both from home and at school to look after their own safety in terms of wearing a mask and social distancing."

Photos taken from other parts of the school grounds showed students abiding by distancing rules and wearing masks.

Grade 10, 11 and 12 students are scheduled to have their health and safety orientation at the school on Friday.

CTV News has reached out to B.C.'s education ministry for comment.