VANCOUVER -- As B.C. health officials grapple with the province's record-breaking third wave of the pandemic, they are urging residents to avoid in-person social interactions as much as possible – even outdoors.

But for the time being, there are no changes to the various public health orders introduced by provincial health officer Dr. Bonnie Henry in November, December and March.

While officials suggested there would be an update on restrictions coming Thursday – particularly regarding the temporary measures introduced weeks ago that include a ban on indoor dining at restaurants – health officials did not address them during Henry's monthly modelling presentation.

"We cannot let up right now," Henry said in answer to a question about the province's current measures.

Henry and B.C. Health Minister Adrian Dix initially said the most recent orders, which were announced on March 29 and also include a ban on indoor group fitness activities, would last until April 19 at the earliest.

A number of restaurant industry groups met with the provincial health officer earlier this week and came away with the expectation that the indoor dining ban would be extended into May, and possibly continue until after the Victoria Day long weekend.

Part of the modelling presentation highlighted just how much transmission had been occurring in restaurants, bars and lounges prior to the new order, revealing there were clusters in about 70 such workplaces in the Vancouver Coastal Health region between February and March that accounted for nearly 160 cases.

Some British Columbians have called for even stricter measures to be introduced, particularly as the province has seen record numbers of people in hospital and intensive care units in recent days. The modelling presentation indicated there has been a recent increase in hospitalizations among those aged 40-79, with the most dramatic spike recorded in the 40-59 age group.

Henry did not appear keen to strengthen the current restrictions, but did make a new plea for people to limit their social interactions. Indoor gatherings remain illegal, and can result in fines of $2,300 for hosts, but people are allowed to gather outside in groups of 10 or fewer. 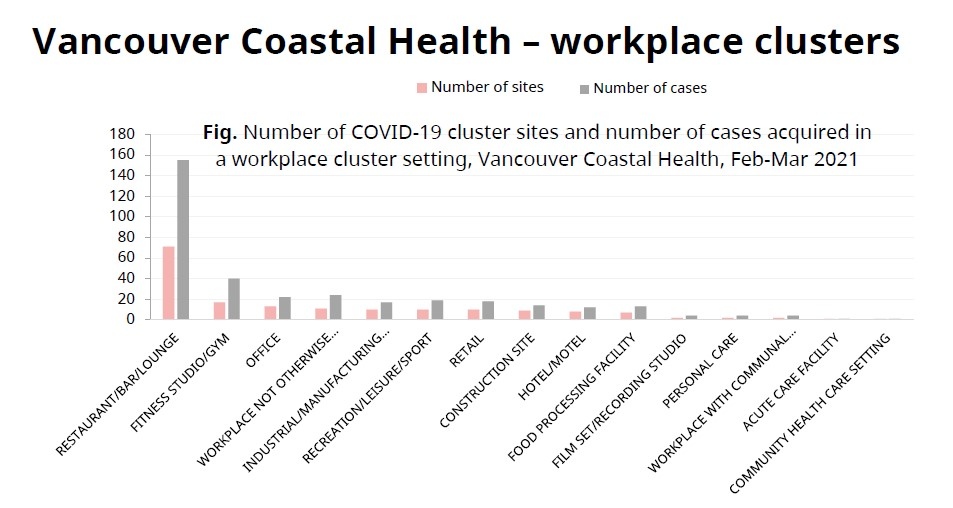 While the province's reproductive rate – which measures how many additional infections are caused by each new case – has been coming back down towards 1.0, Henry said there is still "a lot of transmission in communities across the province."

"What does that mean? Even if we can see people outside our household, we shouldn't right now. And if we do, it needs to be the same small group of people," Henry said.

Henry stressed that while the risk of catching COVID-19 outdoors is lower, there is still a risk, particularly given the prevalence of faster-spreading variants of concern, which now make up 60 per cent of new cases identified across B.C.

"If you're going to be in close contact, wear masks, even if it's outside," Henry said. "We know that COVID-19 is a virus that's transmitted by people to people – and to the people we are closest with."

The variants have made rule-breaking behaviour like meeting friends indoors much riskier, officials said – and substantially increased the chances that bringing the virus home will mean passing it to one's entire family.

"Before if there were 10 people in a household, we might see transmission to two or three other people at most," Henry said. "Now we're seeing, with the new variants in particular, that transmission can be widespread in households. It may be that the whole household becomes infected."

Update: On Thursday evening, a government spokesperson confirmed to CTV News that health officials will be addressing the latest restrictions again on Monday.

Is it safe to work out in a mask? Some Vancouver spin studios stay closed until mask mandate ends

Park passes will be required at these B.C. parks this summer as officials hope to curb crowds